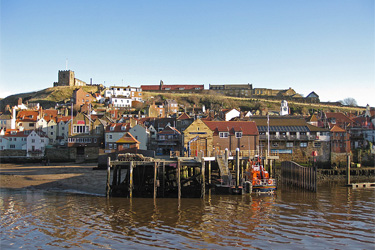 the Coastal Town of Whitby

Whitby is a charming coastal town partly surrounded by moorland of the North Yorkshire Moors and is situated on the east coast of North Yorkshire at the mouth of the River Esk. One of the historically interesting landmarks in Whitby is the ruins of Whitby Abbey, a Benedictine abbey perched high above the town and overlooking the North Sea. The monastery and abbey site was established in the 7th-century and remained until the dissolution of the monasteries by King Henry VIII in 1538. Later, in the early 18th-century the explorer and cartographer Captain James Cook (1728-1779) spent a lot of time in Whitby learning to perfect his seamanship skills. He first learned his trade working on colliers transporting coal from the port. He joined the Royal Navy in 1755 and saw action in the Seven Years War. A statue of Captain James Cook now stands in front of the Royal Hotel.

Whitby has been a busy fishing port since the middle ages and has many historic links with the whaling industry. The local oak timber was ideal for shipbuilding, and in the late 18th-century Whitby became the third largest shipbuilder in England. The first whaling ship set sail from Whitby in 1753, and by 1795 the town had become a major whaling port. However, this was relatively short-lived as the whaling industry in Whitby had declined considerably by 1830.

Today, Whitby is a popular holiday and tourist destination much preferred by older people who enjoy the slower pace of life compared with the other Yorkshire seaside resorts. There is plenty of tourist and holiday accommodation on offer from basic self-catering to good quality hotels. There is also a good choice of fine holiday cottages to rent for a relaxing leisure break or short stay.