Scotland and the Scottish Islands
UK IMAGES and REFERENCE 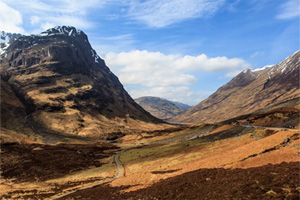 Scotland's History
Scotland's origins date from about AD 843, when Kenneth Macalpine, King of Scots, became also King of the Picts. He gave his kingdom, which was called Alba, a new focal point when, as legend has it, he had the Coronation Stone brought from Dunstaffnage in Argyllshire, seat of the King of Scots, to Scone, near Perth.