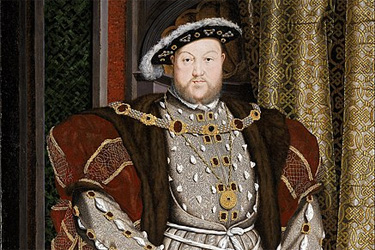 Henry VIII was the second son of King Henry VII and Elizabeth of York and was born on 28 June 1491 at Greenwich Palace, London. He was a popular young man in his early years and had a great fondness for hunting, dancing and entertainment. He became King Henry VIII of England and the second Tudor monarch when his father died in 1509, and many considered him to be an attractive, educated and accomplished young king.

In the early years of his reign he relied heavily on Thomas Wolsey to rule for him, and by 1515 Henry had elevated him to the highest role in government, Lord Chancellor. The first military campaigns at the time were successful - Henry joined Pope Julius II's Holy League against France in 1511, and defeated the invading Scots at Flodden in 1513. Thomas Wolsey proved himself to be an outstanding minister in his organisation of the campaigns and was later made Cardinal.

Henry married his first wife, Catherine of Aragon shortly after becoming king and after he had obtained special permission from the Pope as she was his brother's widow. However, when he later tired of Catherine he sought to have the marriage annulled but the Pope would not agree. This led to the beginning of the Reformation which was to separate the Church of England from papal authority and appointing himself the Supreme Head of the Church of England. He made major changes to the English constitution including introducing the divine right of kings and greatly extending royal power. He achieved many political changes through the work of his chief ministers, some of whom were banished or executed when they fell out of his favour. Thomas Wolsey, Thomas More, Thomas Cromwell, Richard Rich, and Thomas Cranmer all figured prominently in Henry's administration.

His marriage to Catherine of Aragon did not produce a male heir and Henry was starting to become concerned. He was worried that he had only one surviving child, Mary, to show for his marriage to Catherine, who was now in her 40s so the king asked Cardinal Wolsey to appeal to Pope Clement VII for an annulment and it soon became clear he wanted to marry Anne Boleyn, who Henry had been frequently visiting at Hever Castle - her family home in Kent. The Pope refused and Thomas Wolsey's ascendancy was cut short by this failure, and Sir Thomas More was appointed in his place. Thomas More did not act as the king's adviser for long as he did not agree with what the king was doing, so Thomas Cromwell took his place after More resigned.

Henry had now broken with the Pope and made himself the head of the church in England. People who refused to approve of this were executed, among them Sir Thomas More and Bishop John Fisher. King Henry VIII married Anne Boleyn in 1533 and immediately afterwards turned his attention to the monastries and decided that they must all be closed. This was a time when people were discontented with the church and because many of the monks had become slack and lazy.

Henry still had no son to succeed him, his two surviving children being Mary, daughter of Catherine of Aragon, and Elizabeth, daughter of Anne Boleyn. Both were later to become Queens of England. Anne was executed in 1536 on the grounds that she had not been a faithful wife and Catherine, whose marriage to Henry had previously been declared illegal in 1533 by Thomas Cranmer, died also in 1536.