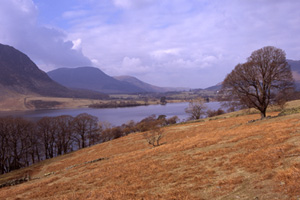 Ennerdale in Cumbria
It is impossible to approach this lake by road except from the west, and it is the most westerly of all the lakes. Near the west end of the lake is a large car park, from where you must proceed on foot up the dale which stretches south-east for about 8 miles and near its head Black Sail Pass leads to the south-west into Wasdale for Wastwater. 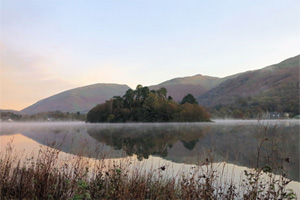 Grasmere in Cumbria
Grasmere is a small village and lake in Cumbria and a popular tourist destination in the Lake District, and gets its name from the beautiful lake nearby. The name Grasmere is believed to come from the old English phrase " lake surrounded by grass." The poet William Wordsworth and his sister Dorothy lived in the charming Dove Cottage on the north side of the lake from 1799 to 1808. 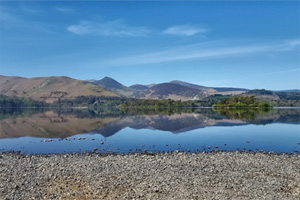 Keswick and Derwentwater
Keswick, in the northern half of the Lake District National Park, and the lake Derwentwater are in the heart of the Lake District surrounded by dramatic countryside and spectacular mountains. It is a peaceful and unspoilt area which appeals to all ages and interests, and tourists and visitors to Keswick and Derwentwater are always impressed by the number of lakes, mountains and valleys which are so close together.