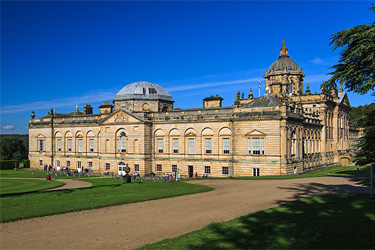 Seen against the prettiness of the Howardian Hills, the splendour of Castle Howard is all the more astonishing. This palace, 6 miles west of Malton, is the largest house in Yorkshire and has no counter-part among English country houses. It is Sir John Vanbrugh's first house; his second was Blenheim. Castle Howard was built to replace Henderskelfe Castle which burned down in 1693. The 3rd Earl of Carlisle chose Vanbrugh to design it, a surprise since at that time (1699) Vanbrugh was a Captain of Marines and successful playwright, but a complete amateur in architecture.

The west wing was added by the 4th Earl's son-in-law. Sir Thomas Robinson. The stables were designed by John Carr in 1781. With its tall arched windows, pilasters, frieze, balustrade and bristling urns and statues, the great house spreads from a central block into wings, with a cupola, unheard of for houses at this date, forming a magnificent central climax. Indoors the grandeur continues with the great marble entrance hall, lit by the dome, a suitable introduction. The house has a vast treasure of statuary, furniture, china, miniatures and paintings by masters such as Rubens, Tintoretto, Van Dyck, Canaleito and Reynolds. Perhaps its most famous picture is Holbein's 'King Henry VIII'. The house has remained in the Howard family. It has been open to the public throughout its existence.

The 1,000 acre park has two lakes and many notable ornaments, including Vanbrugh's Temple of the Four Winds and Hawksmoor's Mausoleum, the size of a Wren church. The house itself is commemorated in a 100ft obelisk on the road through the park, erected in 1714. In memory of his wife, the late Lady Cecilia, Mr George Howard has developed exquisite rose-gardens, including one given over to 18th-century favourites. The Costume Galleries contain the country's largest private collection of garments from the 18th-century till today.