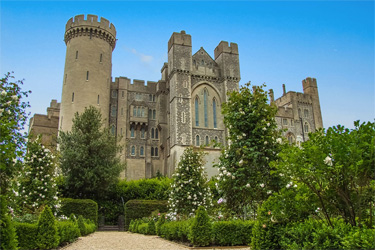 Arundel Castle is a restored medieval castle set in 40 acres of sweeping grounds and gardens with fine views across the South Downs and the River Arun in the attractive West Sssex town of Arundel. The castle was founded and built by Roger de Montgomery from Christmas Day 1067 on an existing castle mound consisting of a central motte protected by a deep ditch on the west side, and is now sometimes referred to as a fairy-tale castle due to the large number of towers, battlements and chimneys it has. Roger, who was a cousin of William the Conqueror and one of his most loyal barons, became the first to hold the earldom of Arundel by the graces of William as a reward for staying in France and keeping the peace while William was away in England. The castle was badly damaged in the English Civil War and then restored in the 18th and 19th centuries - it was besieged twice, first by Royalists and then by Cromwell's supporters.

From the 11th century onward, the castle has served as a hereditary stately home and has been in the family of the Duke of Norfolk for over 800 years. It is still the principal seat of the Norfolk family and is one of the treasure houses of England, each having its own unique place in history and is home to a very fine collection of furniture, paintings, clocks, tapestries, armour and much more, including personal possessions of Mary, Queen of Scots. Arundel Castle is one of the longest inhabited country houses in England.

The first repairs to the castle were undertaken 1718 when the 8th Duke carried out some repairs. Subsequent Dukes carried out more extensive work. Notably, Charles Howard carried out extensive repairs and remodelling work starting 1787. Much of his work was revised by later Dukes, but you can still see his handiwork in the castle's library which is considered one of England's most important interiors from that period. Between the 1870s and 1890s the house was almost completely rebuilt and the magnificent architecture in Gothic style is considered to be one of the great works of Victorian England. One of the Castle’s oldest features, the 30-foot tall Norman Motte and Keep provides breathtaking views across the nearby River Arun, the South Downs and spectacular panoramic views of West Sussex and the surrounding countryside.

Arundel Castle is 4 miles north of Littlehampton and the south coast, and midway between Chichester and Worthing on the A27.

Back to West Sussex Index