The English County of West Sussex
UK IMAGES and REFERENCE 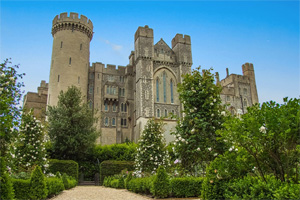 Arundel Castle in West Sussex
Arundel Castle is a restored mediaeval castle in the attractive West Sssex town of Arundel. It was founded and built by Roger de Montgomery from Christmas Day 1067 on a castle mound which was constructed on the site previously, and is now sometimes referred to as a fairy-tale castle due to the large number of towers, battlements and chimneys it has.