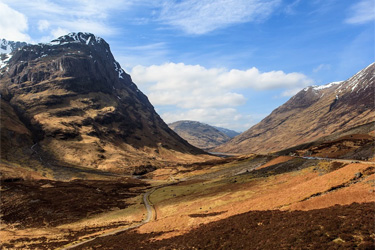 Scotland's origins date from about AD 843, when Kenneth Macalpine, King of Scots, became also King of the Picts. He gave his kingdom, which was called Alba, a new focal point when, as legend has it, he had the Coronation Stone brought from Dunstaffnage in Argyllshire, seat of the King of Scots, to Scone, near Perth. There it remained until Edward I carried it off to London in 1297. It was at Scone, near the centre of Kenneth Macalpine's kingdom, which saw the beginning of each reign, but it was the peaceful Isle of Iona which saw the end. St Columba had landed there in AD 563 to bring Christianity to Scotland, and his island was held in such reverence that for centuries after his death it was a royal burial place. In the tiny cemetery of St Oran are the graves of forty-eight Kings of Scots, among them both Duncan and Macbeth.

For Christian missionary or pagan king, Scotland could be a difficult and dangerous place to travel in or attempt to rule. The geological convulsions which left a legacy of beauty in mountain and loch did nothing to make land communications easy. From Aberdeenshire to the Atlantic, a great mountain massif bars the way to the north and west. Away from the few roads and railway tracks which traverse it, it is still a land of great mountains, desolate moors and peat bogs. The Caledonian Forest has gone, and so have the wolves, but it is still in winter a hostile country, unforgiving to those unprepared for its rigours.

From the Forth-Clyde valley to the Border, the southern uplands form another natural barrier. The classic invasion route was by the east coast through the rich lands of Lothian, west to Strathclyde, north to Fife and Perth, and - coastwise - to Aberdeen and beyond. Against this background, the figures of the early kings flit like ghosts, leaving the landscape little or no trace of their passage.

Shakespeare conferred immortality on two of them, Duncan and Macbeth. But the truth is somewhat different from the play. Duncan was killed in battle, not murdered, and the victorious Macbeth reigned for seventeen years before he in turn was defeated and killed by Duncan's son Malcolm Canmore - the name means 'big head' - who reigned as Malcolm III.

Midway through the eleventh century, Scotland like the rest of Europe was emerging from the Dark Ages. Malcolm's queen, Margaret, did much to assist the new illumination. She and her brother Edgar, natural heir to the English throne, were fugitives from William the Conqueror. She brought to the Scottish court a love of royal splendour and a deep devotion to her religion. The church at Iona, pillaged by Vikings, was repaired; gifts were made to the cathedral of St Andrews; foundations were established at North and South Queensferry to assist pilgrims crossing the Forth, and the abbey at Dunfermline, which Malcolm preferred as his seat, was founded.

Back to Scotland Index