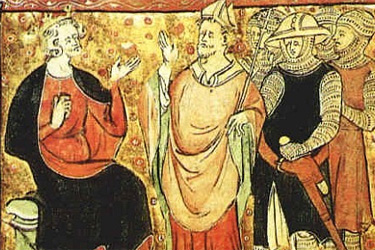 Thomas Becket was born in London in around 1120 and became Chancellor and Archbishop of Canterbury. He spent his first years at Merton priory and a school in London where he studied Latin, and then spent about one year in Paris. When Thomas Becket's father suffered financial misfortune, Thomas was obliged to seek a position in the household of Theobald of Bec, by now the Archbishop of Canterbury. He was sent on several missions to Rome, Bologna and Auxerre to study canon law. In 1154 Theobold named Becket Archdeacon of Canterbury and he was responsible for other ecclesiastical offices at Lincoln Cathedral and St. Paul's Cathedral. He also held the post of Provost of Beverley. His efficiency in those posts led to Theobald recommending him to King Henry II for the vacant post of Lord Chancellor, to which Becket was appointed in January 1155. As Chancellor, Becket enforced the king's traditional sources of revenue that were exacted from all landowners, including churches and bishoprics. King Henry even sent his son Henry to live in Becket's household, it being the custom then for noble children to be fostered out to other noble houses. The younger Henry was reported to have said Becket showed him more fatherly love in a day than his father did for his entire life. Thomas Becket had transformed himself from a pleasure-loving courtier into a serious, simply-dressed cleric.

Thomas Becket was nominated as Archbishop of Canterbury in 1162 shortly after Theobold died. He became good friends with the king and they shared a lot of time together. Thomas helped Henry in the task of trying to restore order in the country, which had been disturbed by civil wars during the reign of Stephen, the previous king. Henry hoped that Thomas, after being made Archbishop of Canterbury, would continue to be his right hand man. However, their friendship was put under strain when it became clear that Becket would now stand up for the church in its disagreements with the king - Thomas was sometimes very proud and stubborn, refusing to give way at all in an argument. Becket then resigned his position as chancellor which upset King Henry II even more. In 1163 Henry attempted to influence other bishops against Becket when the King sought approval of the traditional rights of the royal government in regard to the church and Thomas refused. Realising the extent of Henry's displeasure in 1164, Becket fled into exile in France, and remained in exile for several years. He returned to England in 1170.

Upon hearing reports of Becket's actions and return to England, Henry is said to have uttered words that were interpreted by his men as wishing Becket killed. The king's exact words are in doubt and several versions have been reported. The most commonly quoted, as handed down by oral tradition, is "Will no one rid me of this turbulent priest? Whatever Henry said, it was interpreted as a royal command, and four knights, Reginald FitzUrse, Hugh de Morville, William de Tracy and Richard le Breton, set out to confront the Archbishop of Canterbury. On the 29 December 1170, the four knights, believing the king wanted Thomas Becket out of the way, entered Canterbury Cathedral and murdered Becket. Following Becket's death, the monks prepared his body for burial. According to some accounts, it was discovered that Becket had worn a hairshirt under his Archbishop's garments - a sign of penance.

The Christian world was shocked by this terrible murder and three years later Thomas was made a Saint. King Henry II walked barefoot in penance to his shrine in Canterbury and later many people of the middle ages went there on pilgrimages. The pilgrims in Geoffrey Chaucer's poem The Canterbury Tales were on their way to the tomb of Saint Thomas Becket after setting out from an inn in London. In September 1538 the original shrine of Saint Thomas Becket at Canterbury was dismantled on the orders of King Henry VIII's chief minister, Thomas Cromwell.