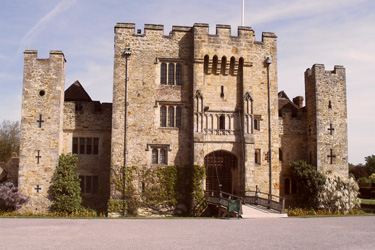 The magnificent medieval Hever Castle in Kent has a rich and varied history dating back more than 700 years and has been involved in some of the most important events affecting Britain's monarchy, history and religion. The most famous resident who lived at Hever Castle was Anne Boleyn who became King Henry VIII's second wife in 1533. The Boleyn (then Bullen) family made many changes and alterations to the castle including a Tudor Dwelling within the walls. Anne Boleyn was Queen of England for just 1,000 days (1533-1536). After Anne Boleyn's death in 1536 Hever Castle passed into the ownership of Anne of Cleves, another of King Henry VIII's wives. Much later, Hever Castle was owned by a number of wealthy and notable families including the Waldergraves, the Humphreys and the Meade-Waldos. These families were responsible for many great changes that we see today.

Hever Castle is open to visitors and is a fascinating place to see. The marked tour inside the castle is a must for any visitor interested in medieval history and the past. One of the most interesting rooms to see is Anne Boleyn's bedroom on the first floor. This room is smaller than most visitors expect, and it still has the original 15th-century half-domed ceiling. It is believed that Anne shared this room with her sister Mary. Another must-see room is known as the Book of Hours room where Anne Boleyn's beloved personal prayer books can be seen. Anne wrote in these books and her signature can still be seen clearly.

The library is a delightful room that overlooks the castle moat and Anne Boleyn's orchard. It once contained about 2,500 books bound in leather for William Waldorf Astor, a man who invested great sums of money and effort into restoring Hever Castle once it started to decline. The library now contains fine Derby-style figures, the Astor family's book collection and a bust of Christopher Columbus.

The Morning Room was a private room in Tudor times and contains a fine example of 17th-century panelling. It was here that the Catholic Waldegrave family had a Priest Hole built as during the reign of Queen Elizabeth I it was forbidden to say Mass. The Waldegraves would have been in great danger if they were caught with a Catholic priest on the premises so it was somewhere for a priest to hide. The Morning Room also has a finely carved fireplace and fine examples of needlework and other crafts on display. The room was very popular with the ladies.

The spectacular grounds and gardens at Hever Castle are beautiful and well-maintained. They were laid out from 1904. One of the most magnificent areas is the Italian Garden where William Waldorf Astor's collection of Italian sculpture used to be displayed. Other delightful garden areas include the Rose Garden, the Tudor Garden and Anne Boleyn's Walk now framed by trees planted more than one hundred years ago. More modern changes to the Hever Castle grounds and gardens include the installation of a Millennium Fountain located on Sixteen Acre Island, a famous Yew tree Maze and a unique splashing Water Maze which is very popular with children.

Back to Kent Index