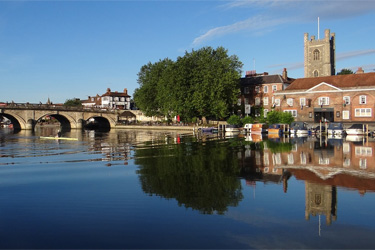 The picturesque town of Henley on Thames in Oxfordshire is situated on the River Thames which marks the county border with Buckinghamshire. The two counties are separated at Henley by an elegant five-arched bridge designed by Salopian William Hayward in 1786. Hayward was assisted by a remarkable woman sculptor, Anne Damer who was a cousin of Horace Walpole. The bridge has many interesting decorations and masks of Father Thames and the goddess Isis. The first recorded settlement here was in the 12th-century.

A hospitable town in a beautiful Chiltern landscape of green fields and wooded hills, Henley on Thames has many old and attractive buildings to see such as the red-brick Red Lion Inn on the banks of the river, the Regency white stucco Catherine Wheel, The Old Bell which is a traditional pub dated by experts to be from 1325, and a great many other old inns and refreshment places. William Lenthall, a Speaker of the House of Commons during the Long Parliament, lived in Henley and the house can still be seen. The Church House in Henley is a fine old building with an overhang and was previously known as Chantry House, built in about 1420 by a zealous priest as a school for poor boys. The Kenton Theatre, one of the oldest performing theatres in England, was built by the people of Henley in 1805 and has a charming curved gallery. The Henley on Thames parish church of St Mary has some fascinating features from the 14th-century and a tall perpendicular tower built in the 16th-century. The tomb of Richard Jennings, Master Builder of St Pauls working under Christopher Wrenn, is located in the churchyard.

The most famous event in Henley is the Henley Regatta which has bought the town more fame than anything else. It is an inter-university boat race which began in 1829 and is now the best known rowing regatta in the world. It became the Royal Henley Regatta in 1851 after the title was given by Prince Albert who became a patron, and was one of the highlights of the English Season by late Victorian times. Then, it lasted four days in July but is now spread over five days. This major event attracts thousands of visitors and tourists.

Places to see nearby include Stonor Park, a beautiful old manor house built on the site of a prehistoric stone circle and is open to visitors. It has been owned by the same family for over 850 years and is set in one of the most beautiful settings in the Chiltern Hills. Stonor Park contains a wealth of interesting features, a 12th-century private chapel, a remarkable collection of drawings and family portraits as well as a fine collection of Japanese ceramics. It is often used as a setting for antique fairs, craft shows and concerts.

Greys Court is an outstanding 16th-century mansion now managed by the National Trust. It is set in the rolling hills of the Chilterns and its own delightful gardens. There is also a series of walled gardens set amid medieval ruins. Greys Court offers a lot to see and do and is a particular favourite of walkers and historians.