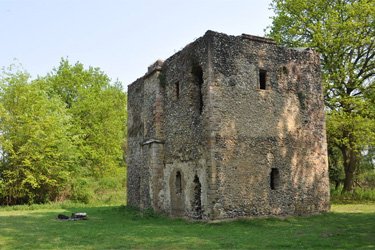 The lonely, old Warren Lodge near Thetford in Norfolk is believed to be haunted, and many people claim to have seen similar apparitions and ghostly sightings over the years. The most common reports tell of a large white ghostly rabbit who sometimes has red glowing eyes, and who occasionally appears in the doorway entrance and hops around. Another frequently reported ghost sighting is that of a faceless man, with black holes where his eyes and mouth were, dressed in blue and cream clothing who peers out from one of the ground floor or upper floor window openings. It is thought that this man was a previous occupant of Warren Lodge or someone who lived nearby. He may have had connections with the nearby Leper Hospital of St Margaret.

Warren Lodge dates from the 14th century and was a defensible lodge to protect gamekeepers and hunting parties against armed poachers. For a long time was used by rabbit 'warreners' who lived in the upper rooms and used the ground floor rooms to store culled rabbits. There used to be hundreds of rabbit warrens in the area surrounding the lodge and it was a profitable business many years ago. Thetford's Warren Lodge is now maintained by English Heritage and is located 2 miles West of Thetford on B1107.

Local tales through the ages advise against looking for the ghostly huge white rabbit as catching sight of it is a very bad omen indeed - it's a warning of your death if you lay eyes on it!