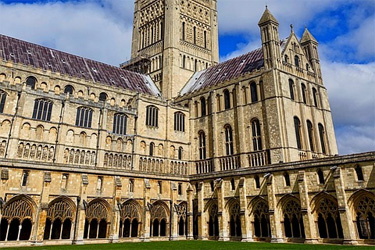 Norwich Cathedral is the cathedral church for the Church of England Diocese of Norwich and is one of the Norwich 12 heritage sites. It was built from 1096 and all the main parts of it are Norman - the nave, transepts, choir, central tower and the two apsidal chapels projecting from the main apse. The main additions were the spire in 1361, the clerestory of the choir and the Bauchun (not Beauchamp) Chapel in the 14th-century. The stone vaulted roofs were constructed in the 15th and 16th centuries.

At the extreme east end of Norwich Cathedral there used to be a Lady Chapel. The original Norman one, which was apsidal, was replaced by a beautiful Early English one in the thirteenth century, believed to have been the work of Bishop Suffield. This perished in the sixteenth century, possibly under Dean Gardiner, and only the fine arches that led into it remain. Outside Norwich Cathedral the west front is mean and badly refaced, and the south transept is yet more dismal in aspect. But the rich Norman central tower, the spire which has a total height of over 95 metres is the second tallest in England despite being partly rebuilt after being struck by lightning in 1169, and the upper stage of the choir with those flying buttresses which are so rarely seen in England, are all delightful.

Inside Norwich Cathedral the choir projects into the nave, or in other words, the stone screen that bears the organ is placed west of the transept as in the case of Westminster Abbey. It was in fact the normal arrangement in churches to which a monastery was attached - this arrangement has not survived in many. You may note here that it is generally true to say that nowhere but in England were monasteries attached to cathedral churches. Normally there was a Bishop, and the cathedral was manned by a Dean and a body of Canons who were not monks: they are said to be 'seculars' not 'regulars'. Examples of such cathedrals in England include York, London, Lincoln and Salisbury. But in England many of the great cathedrals were served by monks, who lived in a monastery adjoining the church. In these cases the Bishop was nominally the Abbot, but he had little to do with the monastery: it was governed by a Prior, who for all practical purposes was the Abbot. Examples of such cathedrals are Canterbury, Winchester, Norwich and Ely.

When the Reformation came and all monasteries were dissolved, it became necessary to reconstitute these monastic cathedrals, and they were all assimilated to one form, and put under Deans and Canons. And the cathedrals that were reconstituted are said to be of the New Foundation regardless of their age.