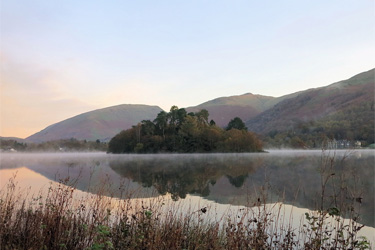 Grasmere in The Lake District

Grasmere in The Lake District

Grasmere is a small village and lake in Cumbria and a popular tourist destination in the Lake District, and gets its name from the beautiful lake nearby. The name Grasmere is believed to come from the old English phrase "lake surrounded by grass." The poet William Wordsworth and his sister Dorothy lived in the charming Dove Cottage on the north side of the lake from 1799 to 1808, and Wordsworth once decribed Grasmere as "the loveliest spot that man hath ever found." Later, William and Dorothy moved to the Old Rectory which is opposite the 13th century Saint Oswald's Church. William Wordsworth died in 1850 and, with his wife Mary, is buried in the churchyard. At the entrance to the churchyard, which is visited by many literary scholars, is the famous Sarah Nelson's Grasmere Gingerbread Shop which was once the village school where Wordsworth and his wife once taught. Grasmere now has many shops, pubs and places to eat which cater for the huge number of visiting tourists.

The lake, where rowing boats can be hired, is just a short, pleasant walk from the village as Grasmere is located at the foot of some spectacular fells, tarns and magnificent mountains. There are many walks and climbs from Grasmere and the most popular walk is around the lake. This usually takes about two hours and passes Red Bank and Loughrigg Terrace where the best views of Grasmere lake are to be had. The walk continues round Rydal Water and onward to the small village of Rydal. The return to Grasmere is by the northern shore of Rydal Water and passes by Wordsworth's Dove Cottage and Rydal Hall. Other popular walks from the village include Loughrigg Tarn and Fell which takes about two hours return.

The National Trust has details of many interesting walks around Grasmere and also manages the property Allan Bank by the lake. This was the home of Hardwicke Rawnsley who helped to create the National Trust.

Back to Lake District