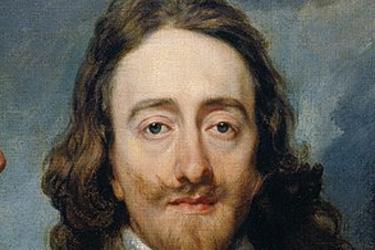 King Charles I and Parliament

King James I had left England in a thoroughly unsettled state when he died and his son, Charles, was not the type of man to improve matters. Charles was good looking, brave and dignified; but he was also obstinate and determined to be an absolute monarch. Like his father he believed in the divine right of kings. He came to the throne with the treasury empty and a war with Spain in progress. To get money it was necessary to come to an agreement with Parliament, but though he called three in four years he quarrelled with and dissolved each one in turn. In 1629 he decided to govern without Parliament altogether.

The Duke of Buckingham was now Charles's adviser and the first Parliament of 1625 refused to vote enough money for the Spanish war, knowing how incompetently it was being carried on by the king and the duke. The religious question was another source of trouble with this Parliament. Charles's sympathies were with Armenian or High Church Anglican party, which had recently come into prominence, with William Laud at its leader. Parliament was frightened that this High Church party would permit the growth of Roman Catholicism and demanded that the laws against the Catholics should be more strictly enforced. So Charles dissolved his first Parliament.

The king, badly in need of money, in 1626 called his second Parliament which immediately attacked Buckingham, blaming him for the disastrous failure of the attack on Cadiz. Parliament was also furious that English ships should have been sent to the French to put down a rising of protestants at La Rochelle. Parliament, under Sir John Eliot, started the impeachment of Buckingham, and refused to supply the king with money until he was dismissed. Charles consequently dissolved his second Parliament.

But Charles, being involved with a war with France, had to have money even more than before, so in 1629 he called his third Parliament. Sir John Eliot immediately drew up the 'Petition of Right' stating that the king should not levy taxes without the consent of Parliament; that he should not compel men to make forced loans of money; that no man should be imprisoned without fair trial; and that he should not rule by martial law. To this Charles unwillingly agreed and he was at last granted the money he required.

Soon after this, Buckingham was murdered but the king's policy remained unchanged. He continued the quarrel with Parliament over the question of the appointment of Armenian bishops, and despite the 'Petition of Right' continued to levy taxes without sanction from Parliament. There was a stormy scene in the House when Charles ordered its dissolution. The members held the Speaker in his chair while Sir John Eliot declared that no one should pay taxes to the king which were not sanctioned. Parliament then dissolved and Eliot was thrown into prison, where he eventually died.

Now followed the period of Charles's personal government. During this period his advisers were Thomas Wentworth, afterwards Lord Strafford, and William Laud, Archbishop of Canterbury and leader of the Armenians. Laud tried to enforce this doctrine on the Puritans through the High Commission Court and the Star Chamber. The Puritans hated him because they thought he had sympathies with the Catholics. In point of fact he hated the Pope as much as he hated the Puritans. He was an able and sincere man, but bigoted and intolerant. Charles's other adviser Charles Wentworth, Earl of Strafford, was a friend of Laud's, and a man of the same type who had been brought back from Ireland which he had been ruling with a rod of iron.

During Charles's personal government the religious and parliamentary quarrels became worse and worse. Charles, as ever, being in need of money, revived a number of old methods of levying taxes among which was 'ship money'. In the time of Elizabeth and before, it had been customary, when the country was in danger, to make the coastal counties build ships or to pay for their building. Charles called upon them to do this in time of peace, and later upon all the counties, both coastal and inland, to do so. It was tremendously unpopular, and a certain John Hampden refused to pay. When the case was tried, however, the judges came to a decision in favour of the king, and the payment of ship money went on.

Laud was continuing to harry Cromwell and the Puritans, large numbers of whom were leaving the country and going to the North American colonies rather than suffer this persecution. He deprived of his living every clergyman who would not use the Prayer Book and when in 1634 a Puritan lawyer named Prynne was sentenced to have his ears cut off for including in a book some words against the queen, and when again in 1637 the stumps of Prynne's ears were shorn off, and he was branded on the cheeks and imprisoned for writing an attack against the Church, public indignation against the government ran high. In 1637, Laud made his fatal mistake. He ordered the new Prayer Book to be used in Scotland. There was a riot in St Giles's Cathedral, Edinburgh, and the people immediately issued the National Covenant promising to defend their religion against the new innovations. A short time later the Scottish Church did away with the bishops and the established church, and re-established Presbyterianism.

Charles failed to raise a satisfactory army to enforce his wishes, and for a time agreed that the Scots should settle these matters for themselves. He recalled Strafford from Ireland, and called the Short Parliament of 1640. But Parliament, led by Pym, refused to vote Charles the necessary money for the war unless he settled Parliament's own grievances. Charles immediately dissolved this Parliament. War was now not far off. In the next Parliament (the Long Parliament) Laud was imprisoned and Strafford sentenced to death by a Bill of Attainder. Ship money and other taxes were declared illegal, the Star Chamber and High Commission Court were abolished, and the Triennial Act was passed by which Parliament should meet every three years and the king should not dissolve it without its consent.

But Charles still had the opportunity of settling matters peaceably. The Grand Remonstrance, drawn up by Pym, stating all Charles's illegal acts and suggesting a plan of Church reform, was only passed by eleven votes. This narrow margin was due to the fact that there was a strong Anglican party in Parliament with whom Charles might of sided. But when on 4 January 1641, Charles went to Parliament intending to arrest five of its leaders, he found 'the birds had flown', as he put it, and war was inevitable.