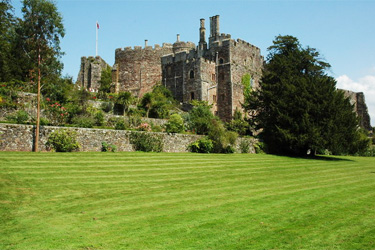 Berkeley Castle is a secluded 11th century castle near the banks of the River Severn in Gloucestershire and is looked after by English Heritage as a Grade I listed building. It has a dark history as it was once the site of one of the most infamous of all medieval murders - the murder of King Edward II in 1327.

The King was deposed early in 1327 by his wife Queen Isabella and her lover Roger Mortimer who was an English nobleman and a powerful landowner with many estates in the Welsh marshes. The both ran the country together at the time. King Edward II was imprisoned in April that year in Berkeley Castle where many attempts to kill the strong king were made. Unfortunately, none of the usual methods worked so he was eventually supposedly killed on 21 September in a very cruel manner. The cell where Edward is supposed to have been imprisoned and murdered can still be seen, along with the adjacent 11 metre (36 ft) deep dungeon. His body was later taken to Gloucester Abbey for burial.

The castle is the third-oldest continuously occupied castle in England, after the royal fortresses of the Tower of London and Windsor Castle, and the oldest to be continuously owned and occupied by the same family, the Berkeley family. The castle was opened to visitors in 1956 and remains open today.

King Edward's son, King Edward III, had Mortimer tried and hanged for treason in 1330 and his mother, Queen Isabella, banished from court. She was to spend the last 30 years or so of her life at Castle Rising in Norfolk becoming a nun of the Poor Clares in her old age. Isabella died in 1358 after spending many of her last years locked up in the castle after becoming insane.