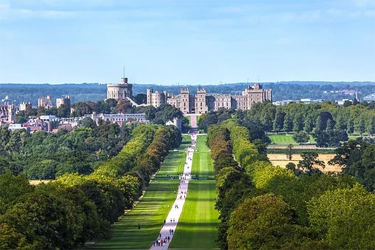 An Early History of Windsor Castle

Windsor Castle in Berkshire is one of three official residences of the British sovereign. Unlike the other two, Buckingham Palace and Holyrood in Edinburgh, it has from its earliest days been a fortress as well as a palace. Edward the Confessor had a residence beside the River Thames at Old Windsor, a couple of miles nearer London but it was William the Conqueror who, at what became New Windsor, built the castle on higher ground further west.

The castle owes its shape and its earthworks to the work of William the Conqueror, although the round tower on the great natural chalk mound or motte was built later, chiefly by Edward III. Of the stone buildings of Windsor Castle, only the core of the thick wall girding the base of this tower may possibly date back to Conqueror's time. To the east and west of the mound William established two great baileys, or courtyards. Walls and towers, altered many times in later years, were first built in stone around parts of these by Henry II.

St. George's Chapel is the most interesting and beautiful part of Windsor Castle. It was begun by Edward IV in 1477 and finished by Henry VIII in 1528. The vaulted roof was one of the finest in the world. Over the stalls (seats) where the Knighs of the Garter attend services are their swords, helms and banners. Sovereigns buried in St. George's Chapel include Edward IV, Henry VIII and his third wife Jane Seymour, Charles I and George VI. Queen Victoria is buried in the royal mausoleum at Frogmore, in the Home Park of Windsor Castle.

At first the Order of the Garter, which was founded by Edward III, used an older chapel which stood until 1483 on the site of the present Albert Memorial Chapel. West of St. George's is the Horseshoe Cloister, built of brick and timber, which was finished in 1481.

As early as 1070 William the Conqueror held his court at Windsor Castle; in 1121 Henry I married Adelaide, his second wife, there; from there in June 1215 King John went to grant Magna Carta; and from this castle Charles I was taken in January 1649 to his trial and execution in London. The news of the battle of Blenheim came to Queen Anne at Windsor Castle in 1704 and Queen Victoria was told there of the Crimean War battles of Balaclava and Inkerman 150 years later.

Windsor Great Park is reached by the Long Walk, an avenue which stretches three miles south of the castle.

Back to Berkshire Index