The Village of Hathersage
UK IMAGES and REFERENCE 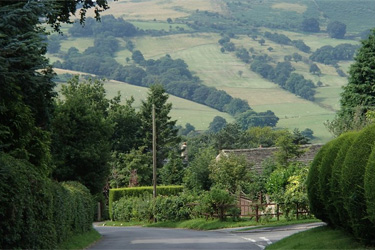 The Village of Hathersage

Hathersage in 'The Peak District'

Hathersage is a pretty village set within the rolling hills of the Peak District National Park in Derbyshire. It is popular with writers and historians researching the legends of Robin Hood and Little John, and those studying the lives of the novelist Charlotte Bronte and the Eyre family. The village is also popular with walkers, climbers and explorers who appreciate the spectacular hills of the Hope Valley and countryside that surrounds it. The Derwent Valley Heritage Trail runs close by the village.

Saint Michael's Church in Hathersage, standing on the hillside above the village, dates from the 14th-century and was built on the ruins of an earlier church built by Richard Bassett during the reign of King Henry I. In the churchyard stones mark the alleged site of the grave of Robin Hood's trusted companion Little John who was said to be born here and died in a cottage nearby. There are two stones at the site and the newer one is inscribed "Here Lies Buried Little John The Friend & Lieutenant of Robin Hood. He Died In A Cottage (Now Destroyed) To The East of The Churchyard The Grave Is Marked By This Old Headstone & Footstone And Is Underneath The Old Yew". The inscription on the much older gravestone has weathered away. It is said that in or shortly after 1780 the grave was opened by James Shuttleworth who found human remains of a person over seven feet tall! The grave plot is over three metres in length and is easily found. Robin Hood's grave is said to lie in the Kirklees Estate which is now private property a short distance away in West Yorkshire. He was reputed to have been born in Loxley just eight miles away.

In 1845 Charlotte Bronte visited her friend Ellen Nussey in Hathersage whilst writing the famous book Jayne Eyre. The friend had a brother who was the local vicar so Charlotte stayed with them at the Hathersage vicarage. It seems that many of the locations mentioned in her book were based in the village. North Lees Hall, an Elizabethan manor house built by Robery Eyre and just outside Hatherage was the inspiration for her Thornfield Hall. This is where Mrs Rochester jumped from the roof to her death.

Hathersage is at located at the eastern end of Hope Valley just to the north of the River Derwent at Leadmill and it has all the usual shops, suppliers, hotels and pubs to cater for the many visitors that arrive each year.