The County of Derbyshire
UK IMAGES and REFERENCE

Bolsover Castle
Brief History of Bolsover Castle
Set on a hilltop overlooking the Vale of Scarsdale, the Bolsover 'Little' Castle we see today was built in the early seventeenth century by the Cavendish family on the site of a medieval fortress. The castle is now looked after by English Heritage and is a Grade 1 listed building said to be one of the most haunted buildings in Derbyshire. 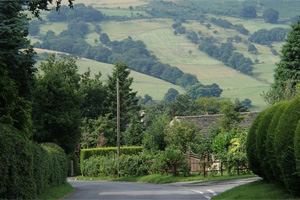 Village of Hathersage
Hathersage is a pretty village set within the rolling hills of the Peak District National Park in Derbyshire. It is popular with writers and historians researching the legends of Robin Hood and Little John, and those studying the lives of the novelist Charlotte Bronte and the Eyre family.