The Ruins of Halton Castle
UK IMAGES and REFERENCE 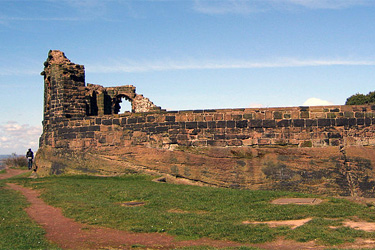 The village of Halton is charmingly placed on the slope of Halton Hill, which is crowned by Halton Castle and the church. Most of the houses are of red sandstone. The castle was the baronial seat of the Marshall of Earl Lupas of Chester, who gave the manner and the office to his cousin Nigel, who was constable of Chester. These offices were held by the succeeding barons of Halton. Bolingbroke, Duke of Lancaster, was the 12th baron, and on his accession to the throne, Halton was joined to the Duchy of Lancaster. The castle was used by John of Gaunt as a hunting lodge, and afterwards it served as one of Elizabeth's jails for the imprisonment of recusants.

The "honour of Halton", possessed at one time "jurisdiction over 37 townships in Cheshire and some in Lancashire." During the Commonwealth, the Manor was sold by Cromwell to Henry Brooke, the castle having been taken by the redoubtable Sir William Bereton. At the Restoration, Halton Castle became again the property of the Crown, and was subsequently leased to Sir John Savage, and afterwards to the Marquis of Cholmondeley.

One of the customs of the Manor was the imposition of a toll of a halfpenny, payable by every drover whose cattle nibbled the grass while crossing the demeane.

This relic of feudal days consists of an extensive outer wall. It was in a ruinous state in Cromwell's time, and since then the remains have undergone further ravage. A very slight conception of the former splendour of the place can be gained from the ruined wall. The situation is, however, a remarkable one, and the castle must have been a very stout fortress. There are wide and beautiful views from Halton Castle ranging from the Mersey to the Welsh mountains.