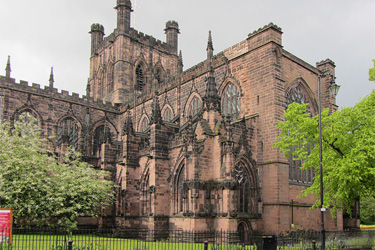 The see of Chester was founded in 1541, the town having been in the diocese of Lichfield and Coventry up to that date. Upon the dissolution of the Benedictine monastery of Saint Werburgh, Chester was made a Protestant bishopric, and the abbey church was re-dedicated. Archaeologists inclined to the view that under the Romans the site of the Cathedral was occupied by the church of St Peter and St Paul, which under the Anglo-Saxons became the church St Werburgh. There is a tradition that before this date, the site was occupied by a druidical temple. It is probable that the re-dedication of the Roman edifice was performed in the reign of Athelstan. Saint Werburgh was a daughter of the King of Murcia, and she became a directress of monasteries. Upon the death of Ermenilde, the mother of Werburgh, the saint succeeded her parent as Abbess of Ely. The date of Werburgh's death is nebulous. She was at one time at Trentham, where she presided over the Abbey, and was about to be buried at that place, when the monks of Hanbury, who were under the direction of Werburgh, came at night, and stole the corpse for the purpose of burial at Hanbury.

Among the eminent bishops were: John Bird, (1541) who was the first prelate. Cuthbert Scott in 1556 lost office through allegiance to Roman Catholicism, when Elizabeth ascended the throne. Brian Walton (1660 to 1661) was the author of the Polyglot Bible written in many languages. Bishop Pearson, who died in 1686 was buried in the cathedral. He was an eloquent theological writer, his best-known work being an "Exposition of the creed.

The first abbot of Chester was Richard, and during his time the Norman work was carried on in the choir and chapels. The next abbot was William (1121 to 1140), in whose time the arches of the north-west tower were constructed. The Norman chamber with the fine roof was built at this period. This style is manifest in the walls of the North transept, in the cloisters and in other parts.

The building of the Lady Chapel, chapter-house and refectory was in progress early in the 13th century. All the East portion of the cathedral is early English, and this is the finest and most interesting work in the edifice. It is well represented in the doorway of the refectory, and the rectangular chapter-house.

Chester Cathedral is a conspicuous object in the landscape. A favourable near view is difficult to obtain, but a good idea of the building can be gained from the walls. The re-casing has imparted a modern aspect to the pile, but the sandstone of the old cathedral was in perilous decay and renewal was necessary.

The West front is much less imposing than the facade of some other English cathedrals, but it has considerable interest in detail. The immense window has some good stonework. The carving of the doorway is exceedingly ornate.

The beautiful creation window in the refectory of Chester Cathedral, designed by Ros Grimshaw and installed in 2001. The window depicts the hand of God moving through the six days of creation, from left to right: God creates the heavens and the earth; Let there be firmament in the midst of the waters; Let the earth put forth vegetation, plants yielding seed, and fruit trees bearing fruit; Let there be lights in the dome of the sky to separate the day from the night; Let the waters bring forth swarms of living creatures, and let birds fly above the earth across the dome of the sky; Let us make mankind in our own image, according to our likeness, and let them have dominion over the fish of the sea, and over the birds of the air.

Amongst many features of interest in this window are the pole or northern star and aurora borealis in the first panel, the earth viewed from space in the lower section of the second panel, and a developing child in-utero in the sixth panel. A representation of a brain scan is positioned at the bottom of the fourth panel - this actually depicts a scan of an individual suffering from Parkinson's disease. The window's designer Rosalind Grimshaw was diagnosed with Parkinson's Disease.