History of Beeston Castle in Cheshire
UK IMAGES and REFERENCE 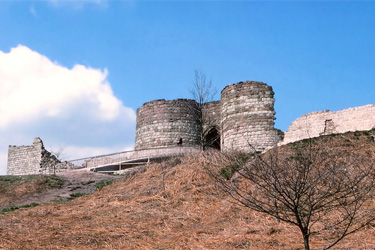 Beeston Castle was built in 1220 by Ranulph de Blundeville, 6th Earl of Chester, upon his return from the Crusades. In 1237, Henry III took over the ownership of Beeston, and it was kept in good repair until the 16th century, when it was considered to be of no further military use. In 1309 the castle housed 100 men-at-arms, and was used as a treasure house by King Richard II. During the English Civil War, the fortress was occupied by the Parliamentary troops, and in the following year, Captain Sandford, a Royalist, seized it. The Puritan defender, Captain Steele, was tried for cowardice and sentenced to death. In 1644, the Parliamentary force again besieged the castle, but it was relieved by Prince Rupert and Prince Maurice. After the battle of Rowton Heath there was a seven weeks siege, and the defenders finally yielded. No victuals were found in the castle except a piece of turkey pie and a live peacock and a peahen. In 1646 Beeston Castle was dismantled.

The ruins cover a circumference of about 1.5 kilometres, the inner ballium occupies about 1 acre. The castle is entered by rough steps to a steep narrow-pointed gateway on the west side. On the right of the entrance is a well, which has caused much antiquarian discussion. It extends downwards to Beeston Brook, a depth of 110 metres, and it was cleared of rubbish in 1842. This was traditionally the place where King Richard II concealed his treasure from his pursuing enemies in 1399. Many determined efforts to explore the well have discovered no treasure, though the most recent (in 1976) did reveal mysterious openings leading from the well shaft. Two sides of the keep are on the edge of a sharp precipice. The building has been described as Saracenic, a style introduced by the Crusaders.

A finer position could not have been selected for the erection of a fortress. The height upon which it is reared is a rock of new red sandstone, which on the north and east sides forms a precipice of about 110 metres. From the castle there is a remarkable view of the estuary and of the River Mersey, Delamere Forest, the Staffordshire and Derby Moors, the Peckforton Hills and the Wrekin, while in clear weather the mountains of North Wales are sometimes visible.

Beeston Castle is a Scheduled Ancient Monument, owned by English Heritage. It is rumoured that treasure belonging to Richard II lies undiscovered in the castle grounds, but the many searches that have been carried out have failed to find any trace of it. During the 18th century the site was used as a quarry.