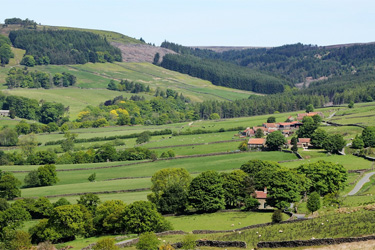 Yorkshire and Boundary Changes in 1974

The North Riding including the north corner of the west, is the most strikingly beautiful stretch of the county. Fine Pennine heights make a superb backcloth to the landscape, and the lovely northern dales of Swaledale and Wensleydale roll away in beauty to the east. Generally, the North Riding is pastoral and agricultural, the West Riding is industrial and the [old] East Riding is arable country and land. The coast of the North Riding holds fishing villages such as Staithes and Robin Hood's Bay, and seaside resorts such as Whitby and Scarborough, North Yorkshire.

Yorkshire, before the redrawing of the county boundaries in 1974, was the largest county in England, containing about an eighth of the country's area and a tenth of its population. The revision of the county boundaries gave a small western corner, embracing Barnoldswick and the Forest of Bowland, to Lancashire, a north-western corner, containing Sedburgh, to the new county of Cumbria, a northerly corner containing Bowes to Durham, and the top edge of the North Riding, including Saltburn and Redcar on the coast, and running inland to Middlesborough, to the new county called Cleveland. More drastic was the removal of the East Riding, including the Wolds, into a newly constituted county called Humberside, in which was also incorporated the northern part of the old Lincolnshire.

The much-reduced Yorkshire is now divided into three administrative zones: North Yorkshire, comprising most of the old North Riding; West Yorkshire, embodying the former West Riding; and South Yorkshire. The shape of Yorkshire is simple: roughly a square, pulled down a little in its lower left-hand corner. Its west boundary is formed by the line north and south of the mountains of the Pennine chain, and it stretches right across England eastwards towards a slightly north-west south-east coast on the North Sea. If its shape is simple, however, in all other aspects Yorkshire is highly diversified. Geologically it is amazingly various, and this has given it not only a most delightful and refreshing variety of landscape but certain contrasts in history and economics, in dialect and in ways of life.