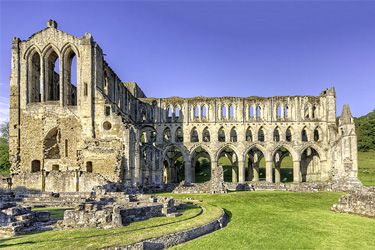 Walter L'Espec, the founder of Kirkham Priory, granted this site in the wilderness to a band of 12 Cistercians in 1131, and thus began an exceptionally prosperous house. Its grandeur is indicated by the ruins here of buildings mostly completed before the end of the 12th-century. Under the third abbot, the great Aelred (1147-67) there were 140 monks and more than 500 lay brothers. The abbey was too large by the 15th c, however, and parts of the chapter house, warming house and dormitory were taken down.

By the Dissolution in 1539 there were only 22 monks. The site, now tended by the Department of the Environment, is one of the loveliest in England. It is in the Rye Valley 3 miles north west of Helmsley, marvellously secluded, sheltered from the moors which rise above it, and filled with beautiful trees. Rievaulx was the first Cistercian abbey in Yorkshire. There are considerable remains of the lofty church and the extensive monastic quarters. The church nave dates from c. 1135. The choir is a particularly fine example of 13th-century work.

The long curving terrace which overlooks Rievaulx affords the most satisfying vantage point. This gem of 18th-century landscaping belonged to Duncombe Park. When it was laid out, the gentry would drive over to enjoy the views of the desolate abbey and the wide sweep of Yorkshire beyond the valley. At one end was built an oblong Ionic temple, richly decorated and furnished, for hunting-parties. At the other end there is a small round Doric temple for solitude. Along the easy stroll between them are openings in the forested slope, cleverly cut to show Rievaulx from interesting angles. These are the views that held Dorothy Wordsworth spellbound, that Turner painted and made Cowper wish to stay forever. The terrace is reached by a lane from the Helmsley road and is the property of the National Trust.