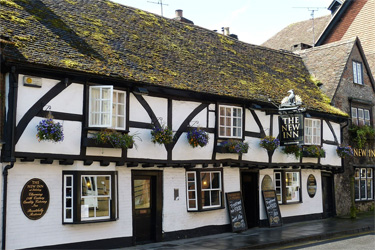 The City of Salisbury

The City of Salisbury

On Salisbury Plain, a few miles west of Salisbury, stand the ancient stones of Stonehenge. The plain is dotted with small woods and clumps of beech trees. The Salisbury Avon is the main river of Wiltshire and rises near Bishop's Cannings, on the edge of the Marlborough Downs, and flows south through Salisbury to the English Channel. Salisbury Cathedral has the tallest spire in England at a height of 404 feet, and most of the cathedral is built in the Early English style of Gothic architecture but the spire was added later. The Cathedral contains the best-preserved of the four surviving copies of Magna Carta. Before Salisbury was built, two miles to the north, Old Sarum was important but now is only a great mound with some traces of ancient ruins. Old Sarum was an Iron Age fort with ramparts and traces of a Norman cathedral. New Sarum, as Salisbury was first called, was partly laid out in squares. The hilltop at Old Sarum lies near the Neolithic sites of Stonehenge and Avebury. In the middle of the city is a beautiful 14th century market cross, round which poultry used to be bought and sold. The chief industries of Salisbury were boot and shoe-making, and engineering.

Salisbury was an important centre for music in the 18th century. The grammarian James Harris, a friend of Handel, directed concerts at the Assembly Rooms for almost 50 years up to his death in 1780, with many of the most famous musicians and singers of the day performing there. The city has has a strong artistic community, with galleries situated in the city centre, including one in the public library. In the 18th century, John Constable made a number of celebrated landscape paintings featuring the cathedral's spire and the surrounding countryside.

Back to Wiltshire Index