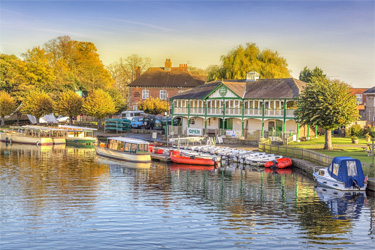 Stratford-upon-Avon is an attractive market town and pleasantly situated on the right bank of the River Avon. It is a prosperous town and owes its prosperity mainly to the fact that William Shakespeare was born here in 1564. It is now almost a shrine drawing hundreds of thousands of visitors and tourists come from all over the world to visit Shakespeare's birthplace in Henley Street every year. The site is now the garden and museum which was called New Place which he purchased when he retired from London to Stratford-upon-Avon. Also visited are Hall's Croft, where Shakespeare's eldest daughter Susanna lived with her husband, Dr. John Hall; and Shakespeare's grave in Holy Trinity Church. Just outside Stratford, at Shottery, is the cottage of Anne Hathaway, Shakespeare's wife, and at Wilmcote, four miles away, is the farmhouse where his mother, Mary Arden, lived before she married and went to settle in Stratford. The most outstanding of the town's modern buildings is the Shakespeare Memorial Theatre on the banks of the River Avon, which was opened in 1932.

The wide streets contain many well-kept 18th century houses as well as the half-timbered buildings for which they are renowned. Stratford-upon-Avon has many picturesque and excellent hotels and restaurants both in the town and by the River Avon. In the 15th century the stone bridge over the Avon was built.