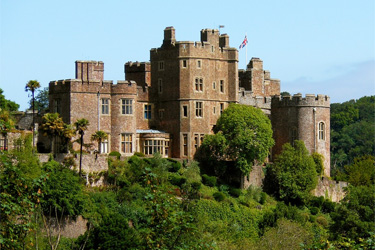 Perched on a steep hill on the eastern edge of Dartmoor, Dunster Castle dominates the pretty medieval village of Dunster in the beautiful county of Somerset. There has been a castle on this site since Norman times when the sea reached up to the base of the hill and provided a perfect natural defence.

Shortly after William the Conqueror invaded England in 1066 the conquest of south-west England was left to his half-brother Robert of Mortain who, supported by William de Mohun and his forces, marched into Somerset. By 1086 William de Mohun had established a castle at Dunster with the intention of guarding the north Somerset coast and the local roads running from Somerset into Gloucestershire.

Dunster Castle eventually came into the possession of the Luttrell family in the late 14th century who were to keep it for the next six hundred years. During this time the different family members made many changes and improvements - for example, when the sea receded in the 15th century they created a deer park on the available land, and in the early 1400's The Great Gatehouse and a fortified outpost were constructed. The 15th century saw the Wars of the Roses and the Luttrell family were supporters of the House of Lancaster but lost control of Dunster Castle temporarily when the Lancastrians were defeated in 1461. Later, in 1485, the castle was restored to the Luttrell family who continued with the necessary repairs and restoration after various periods of neglect.

Today, Dunster Castle is a popular tourist attraction looked after by the National Trust. Only the medieval Great Gatehouse, 13th century gates and a few ruined towers remain from the original castle. A 17th century manor house is the heart of the castle now.

The village of Dunster has often been described as a perfect West Country village. Located in a magnificent position between overhanging hills and woods, Dunster has the Luttrell Arms, which was an abbot's residence years ago, a priory church, a market cross, and several red sandstome medieval houses - all presided over by Dunster Castle.

Back to Somerset Index