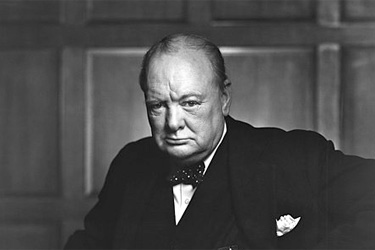 Sir Winston Spencer Churchill was born in 1874 at Blenheim Palace. One of his ancestors was the first Duke of Marlborough who won the battle of Blenheim in the reign of Queen Anne. Churchill became one of the greatest men in British history. In his early years he was a soldier in India and the Sudan, and was captured by the Boers in South Africa while he was a war correspondent. Later he became a Member of Parliament and Cabinet Minister; and during the First World War he was for a time First Lord of the Admiralty.

After the outbreak of the Second World War he was made Prime Minister and proved to be an inspired and inspiring leader both of the British and of the peoples of many nations who were fighting for freedom. He was again Prime Minister from 1951 to 1955 and was knighted in 1953 As well as being a statesman and soldier, Churchill has written many-volumed works on both the World Wars. Churchill suffered a severe stroke and died at his London home aged 90, on the morning of Sunday, 24 January 1965, 70 years to the day after his own father's death.