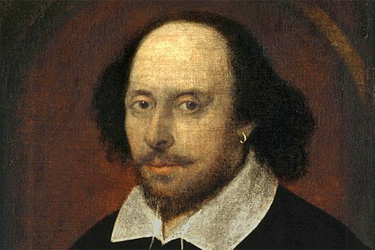 William Shakespeare was born at Stratford-on-Avon, and baptised in Stratford church in 1564. He married Anne Hathaway, and they had three children - Susanna, and the twins Hamnet and Judith. Shakespeare went to London to seek his fortune and joined a company of players at one of the theatres outside the city. He earned his living by acting small parts, by rewriting old plays, and then by writing plays himself. These plays were very successful and Shakespeare was able to buy a fine house in Stratford-on-Avon, and later to retire there.

His plays were written in verse and are not always very easy to understand, but he created a multitude of wonderful characters and told many delightful stories, as in A Midsummer Night's Dream, Twelfth Night and As You Like It. These are all comedies. He also wrote historical plays like Henry V and Richard II, and tragedies such as Hamlet, Othello and Macbeth. Although Shakespeare died in 1616, actors still perform his plays today.