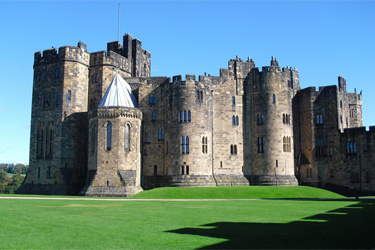 Alnwick Castle in Northumberland was built following the Norman conquest and is the seat of the Duke of Northumberland. The early parts of the castle were built in about 1096 by the Baron of Alnwick who wanted to guard the road that crosses the River Aln, which flows past the north side of the castle, and protect the English border with Scotland. As the county of Northumberland borders Scotland directly, Alnwick Castle was always a target for the Scots and Scottish influence. However, the castle was captured by King David I of Scotland in about 1136 and later besieged in 1172 by William the Lion, King of Scotland. During the Battle of Alnwick in 1174 William was captured by a small English force led by Ranulf de Glanvill. William had inherited the title of Earl of Northumbria in 1152. However, he had to give up this title to King Henry II of England in 1157.

In the mid thirteenth century Alnwick castle was sold to the powerful Percy family who immediately began a series of urgent repairs and improvements. Henry Percy managed to turn the stone-built Alnwick Castle into a major fortress whilst at the same time providing residential space and facilities for his family. After Henry Percy died his son, also called Henry, continued the rebuilding work. The main parts of Alnwick Castle that survive from this period are the Abbot's Tower, the Constable's Tower and the Middle Gateway.