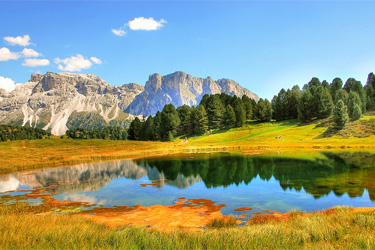 The Dolomites in Northern Italy

The Dolomites in Northern Italy

The Dolomites have a rich culture and tradition. Over the centuries, the valleys have preserved their individual traditions, rooted in the Longobard past. This legacy is also responsible for many words and expressions, giving rise to first Ladin and then German surnames. The area's German roots can be traced back to domination that began when the Baiuvari swept down in the 6th century, followed by the Habsburg dynasty in 1363, and ending with the conclusion of the First World War, when the whole area was given to Italy.

Much of the Ladin population from the province of Belluno was not affected by these events; following domination of first the Counts of Camino and then the Patriarcate of Aquileia and finally the advent of Venice, they were strongly influenced by all aspects of Venetian culture. Much of the Ladin language was lost, although if we look closely, we can still find a common origin in the roots of words.

This is the origin of the diverse, elaborate costumes of each town, which vary significantly from valley to valley but always have the same basic structure. Worn on all the most important occasions, including religious and traditional festivals and other events, the costumes also identify marital status. While there is less difference among the men's costumes, women's costumes are quite diverse. Certain costumes are worn by young unmarried women, certain by married women, and others by older women. Even the various seasons have very different costumes.

Architecture also differs slightly from valley to valley; the living area or the rustic section may be in the front, or the two areas may be separate but close together. What is most striking is the love and care that residents show for their homes. Everything is always very orderly, with every balcony bursting with flowers, even in the most hidden corners, and wooden sections are often magnificently worked. The interiors are simple yet very warm, clean and cosy. The main room of the house, known as the stube, is completely panelled in wood, with magnificent ceilings made of framed squares, with a sometimes very large bas-relief sculpture in the centre. In a corner stands the famous wood-burning stove, sometimes completely white with a dome, and sometimes covered with ceramic tiles.

Home furnishings often include magnificent 18th century pieces, completely painted in bright colours and floral patterns. Dolomite cuisine retains its peasant origins, with simple yet natural products from the land and the animals. Despite this, some dishes have become famous with both Italian and foreign tourists who visit the Dolomites, and certain products, such as the well-known speck, have also become famous.

Back to Italy Index