The Bridge of Sighs in Venice
UK IMAGES and REFERENCE 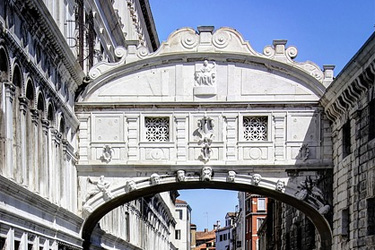 The Bridge of Sighs in Venice

The Bridge of Sighs

Antonio Contino's bridge over the Rio di Palazzo was built circa year 1600 to connect the Doge's prisons, or Prigioni, with the inquisitor's rooms in the main palace on the left. The prison where so many inmates were confined is on the right. The Bridge of Sighs in Venice received its name in the 17th century, because the prisoners who passed through it's two passages inside on their way to the prison cells on the other side would more than likely see the beautiful sight of the lagoon and the island of S.Giorgio and freedom for the last time.

However, it was only in the 19th century that it came to be called the 'Bridge of Sighs' after Lord Byron's famous reference in his poem Childe Harold's Pilgrimage "I stood in Venice on the Bridge of Sighs, a palace and prison on each hand". The Bridge of Sighs which spans the Rio di Palazzo is one of over 400 bridges and structures across the 100 or so canals and waterways that connect and wind through the city of Venice.

The interior of this famous bridge in Venice is divided into two narrow passages separated by a wall. From inside its grilled windows, prisoners were led to the State Inquisitor's Room on the third floor of the Palace. The bridge is completely enclosed and seems somewhat short. Many of the prisoners had to slouch to get through, and the grills obscured the otherwise superb view of the canal and other distant bridges - always out of reach.

In reality, the days of inquisitions and torture were over by the time the bridge was built and only small time crooks were kept in the prison cells. The prison building is older than the Doge's palace and was at one time used during the inquisition by the Church during the Middle Ages when people were suspected of being heretics, witches or non-believers in the faith, and tortured and generally tormented.

Back to Italy Index