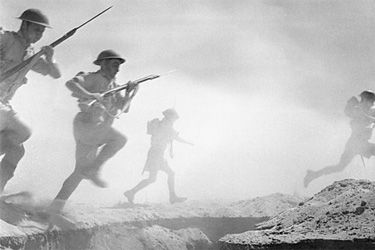 By July, 1942, after almost continuous campaigning since the end of 1940, the British forces in North Africa had been forced back to El Alamein in northern Matrouh, Egypt, only sixty miles from Alexandria and 150 miles west of Cairo. The German Afrika Korps under General Rommel and Italian forces threatened to take control of Egypt and the Suez Canal, the Middle Eastern oilfields, and break through into Asia and join with their forces advancing through the Caucasus. Rommel's plan was to attack the British forces and Allies in the south as he had done so before, even though he was seriously short of fuel, but General Montgomery and the British Eighth Army were ready for him - helped by the code-breakers at Bletchley Park who provided invaluable information on the German positions, strengths and intentions.

So, in October the British Eighth Army under Lieutenant-General Bernard Montgomery launched an attack which was to drive the Axis forces back to Tunisia and enable the Eighth Army to link up with the Anglo-US forces which landed in French North Africa in November 1942. In May, 1943, German and Italian resistance in North Africa ceased, after which the Allies captured Sicily with comparative ease. Faced with invasion after a series of military disasters, Italy surrendered on 8 September. The Italians failed to neutralise the German forces in the country and the invading Allies were faced with a campaign which did not end until Germany and the German Afrika Korps finally surrendered in North Africa in May 1943.

After the battle of El Alamein, which was one of the most decisive victories of WW2 and marked a major turning point in the Western Desert Campaign, Winston Churchill wrote: Before Alamein, we never had a victory. After Alamein, we never had a defeat. There is now a war museum in El Alamein and the cemeteries for the German and Italian war dead at Tel el-Eisa Hill just outside the town are open to visitors. There is also a military cemetery for Commonwealth troops for those on the British side, including those who died from Greece, Australia, New Zealand, South Africa, Canada and India.