The Cinque Ports from the 12th-Century
UK IMAGES and REFERENCE 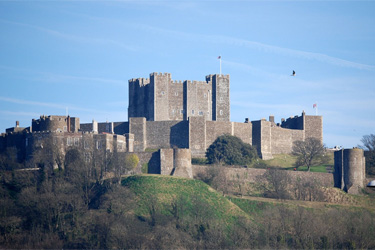 The Cinque Ports, as their name suggests, cinque is the French word for five, were originally five ports in number - Hastings, Sandwich, Dover, New Romney and Hythe, and in medieval times the town of Hastings was the head port. They were established by a Royal Charter in 1155 by Edward the Confessor to maintain ships and defences for the Crown in case of attack and war. Particularly fearsome at the time was the real threat of invasion by the Vikings from Norway. This action formed the basis of the Anglo-Saxon defence policy of the south and south-east coasts of England. When necessary the Cinque Ports had to provide a certain number of war and transport ships with crews ready for action, and in return they received many privileges and benefits from the Crown including exemption from paying taxes. Later, King Edward I of England granted the people of the five original ports further privilages such as being permitted to bring goods into the country without paying import taxes, tolls or customs duties.

After the Norman Conquest the towns of Winchelsea and Rye were added. There are other members of this group of ports, known as limbs; they are Lydd, Faversham, Folkestone, Deal, Tenterden, Margate and Ramsgate. The Doomsday Book records the obligation of the original Cinque Ports to provide ships and men to the Crown once a year. Although Hastings was the original principal port much of the town was ruined in the 13th-century both by the sea as it had no natural harbour, and by the French during several naval campaigns. By the 13th-century Sandwich became the main Cinque Port on the south-east coast of England.

The Barons of the Cinque Ports, who were originally Freemen of the Ports, had the privilege of attending the Coronation and carrying a canopy over the Sovereign. The canopy is no longer carried, but the Barons retain their right to attend the ceremony. Today, with Walmer Castle being the official residence of the Warden of the Cinque Ports, the job is all but ceremonial.