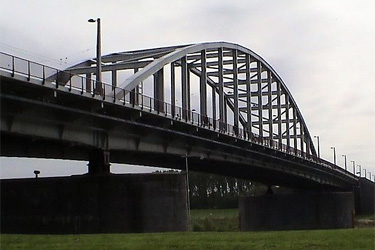 The Bridge at Arnhem today

Operation Market Garden was an attempt to establish a bridgehead across the river Rhine by the dropping of the 82nd and 101st US and 1st British Airborne divisions and the advance of the British 30th Corps, had been launched on 17 September 1944. It was commanded by a British officer, Lt-General 'Boy' Browning.

A combination of misfortune, poor intelligence and underestimates of German defensive strength meant that the British, dropped furthest away from the front line, were unable fully to capture their objectives - the bridges in the Dutch city of Arnhem - and were not reinforced by ground troops quickly enough. They withdrew on 25 September, effectively destroyed as a fighting unit.