The Agadir Incident in 1911
UK IMAGES and REFERENCE 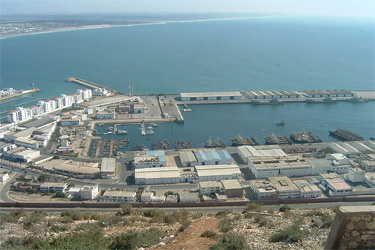 During the first decade of the twentieth century, France was extending her empire in North Africa, particularly Morocco and the surrounding areas. Germany was also extending her territory in the region and wanted her share of what was believed to be on offer. This included lucrative mining concessions in southern Morocco as well as other commercial and economic interests. When, in the spring of 1911, French troops entered Fez - which was an important and strategic town in Morocco and was also where the Sultan Mulay Hafid was besieged during a rebellion of rebel tribesmen sympathetic to German interests - Germany protested most strongly, and subsequently demanded The French Congo in compensation. It was also considered that France had broken the Franco-German Accord of 1909.

Backing her demand by force, Germany sent the warship Panther into the harbour at the Moroccan port of Agadir on 1st July, 1911 claiming that it was to protect German trade interests in the region. The Panther was soon to be replaced by the cruiser Berlin. Anglo-German tensions were high at this time partly because of an arms race between Germany and Britain, and war seemed imminent as both France and Germany mobilised their armed forces. Negotiations between France and Germany came to an abrupt halt on 1st September, 1911. Great Britain took a firm stand with France, and an agreement was eventually reached by which Germany recognised a French Protectorate in Morocco and received in compensation the Cameroons in the Congo basin. Germany's use of force in this matter was ominous for the Great War that was about to come.