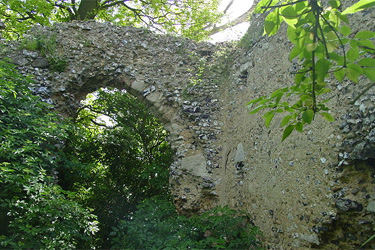 The Ruins of Minsden Chapel

Minsden Chapel, near the Hertfordshire hamlet of Chapelfoot, is an isolated ruined medieval chapel believed to be haunted. The chapel, which is surrounded by a small dense wood, was named after Saint Nicholas, protector of children and the poor. It was built in the 14th century and once hosted church services and marriages for the local people. The Minsden Chapel site is considered by some to be very atmospheric with many visitors reporting strange feelings as they walk round the ruins.

Stories of paranormal activity began in the early 20th century following the publication of a photograph of a 'monk' standing under one of the chapel arches. This photograph, taken by Thomas William Latchmore, was subsequently admitted to be fake but other reports such as a ghostly monk climbing now non-existent stairs, a little girl wandering the chapel and grounds, and sights of a glowing cross suddenly appearing on various walls have been confirmed by many. Other visitors have briefly heard distant music and the sounds of ringing church-like bells - the Minsden Chapel bells were stolen in 1725.

Access to the Minsden Chapel site is along a marked footpath (from the B651) across a large field which can be quite muddy at times. The path skirts the wooded copse and nearer the ruins is a crossing style. There is a small carpark just a short distance away.