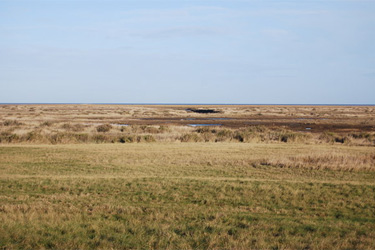 The Screaming Cockler at Stiffkey

Stiffkey is a small village on the north Norfolk coast situated between Wells-next-the-Sea and Blakeney which are all in an Area of Outstanding Beauty called the North Norfolk Coastal Path. The village was famous as the home of one of England's largest saltmarshes and rich in blue cockles and wildlife. Here, there is a vast mudbank called the Blacknock which, in the 18th century, provided an income for the scores of women who waded out in the mud collecting the popular blue cockles. It was very dangerous work as the tide comes in extremely quickly over the flats but the local women collecting the cockles (cockling) knew this and were very aware of the dangers.

A regular group of women went out collecting one day and in the late afternoon decided that it was time to return to the shore as the weather was closing in. Unusually, one young woman called Nancy found herself further out than the rest as the others began to make their way back with their large bags of cockles before the incoming tide came in - she was trying to collect a few more handfuls of cockles before finishing. All of a sudden a thick mist descended on the mudflats which soon turned to a dense fog. As Nancy made her way back to shore through the sticky mud the fog caused her to lose her bearings. The tide by now was rushing in so she repeatedly screamed for help from the other women who were now nearing the shore. They heard her screams for help but could not see her in the fog so could not do anything. Her screams were heard by some local fishermen but they could not launch their boats as the tide was still too low. The villagers with smaller boats who managed to launch could not find her. There was nothing anybody could do.

Soon Nancy's screams stopped as she had drowned. Her body was recovered the following day. It is said that since then, on foggy and dark days, her ghost can be seen and screams from the Blacknock mudbank can sometimes be heard again. The local people say it is a warning by restless spirits of the dangers of venturing too far out on the mud flats. Nancy was buried in the local churchyard.