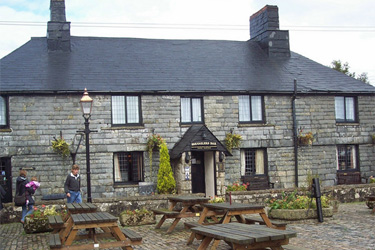 The Jamaica Inn, which is close to the bleak, windswept and desolate Bodmin Moor in Cornwall, has a long-standing reputation of being one of the most haunted places in England. It is a former 18th-century coaching inn that has been extended twice up until the 19th-century and was made famous by the British novelist Dame Daphne du Maurier DBE who featured it in her short story "The Birds" and her classic novel "Jamaica Inn". Jamaica Inn was built from 1750 to cater for travellers passing by.

A number of spooky foreign voices are said to have been heard by staff and guests particularly in the Smuggler's Inn, the restaurant, the stable bar and one of the guest rooms - room four which is named Harry the Pedlar. There are reports of cold spots, lights, TV's and showers suddenly coming on at night in various rooms, a vicious, malevolent highwayman who walks straight through locked doors, possibly the spirit of Jack Travellis a notorious smuggler who was put to death close by, a young anguished mother carrying a baby who stares back at you in a mirror (normally room five), and young smugglers who roam the courtyard during the night. Horses and carriages with metal rimmed wheels have also been heard moving in the cobbled courtyard but when guests look out of the window they see nothing. The courtyard is always empty.

The Jamaica Inn is home to many ghosts and spirits, and frequent sightings are claimed to be seen in the old menacing and spooky stable block where many people fear to go. The attic is not popular either! One other famous ghost is thought to be the spirit of a stranger, possible a sailor, who was murdered on Bodmin Moor and many believe that he is returning to finish his last drink in the bar. He is sometimes seen sitting on the wall outside the inn but his spirit doesn't speak or make any acknowledgement. His identity remains a mystery to this day. There are also reports of a man found hanging by his neck from a nearby tree.

The television programme Most Haunted have said that the episode they recorded at the Jamaica Inn was one of the most spookiest and scariest they have ever done.