Legend of The Flying Dutchman
UK IMAGES and REFERENCE 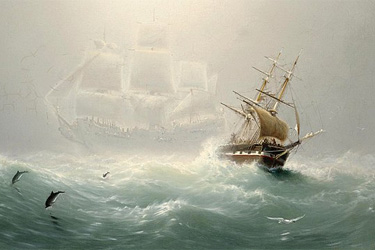 The Flying Dutchman is a legendary ghost ship that can never make port and is doomed to sail the world's oceans forever. The tale of a spectral sailing ship with ghostly lights and it's captain Hendrick Van der Decken is likely to have originated in the 17th century, with reported sightings made years later. Like all myths and legends, they get told and re-told so many times that inevitably changes and additions are made to the original tale. The story of the ghostly Flying Dutchman was probably started by sailors and crews in the port taverns in The Cape of Good Hope, South Africa.

The legend says that a sea captain, Hendrick Van der Decken, was doomed by a curse to sail around the Cape of Good Hope until doomsday for exceeding God's bounds and challenging the Heavens. He had been obsessed with sailing around the Cape to continue his planned voyage without waiting for the fierce storms that were raging to subside. His crew pleaded with him to wait until it was safer, and even a voice from Heaven telling him to turn back and seek shelter in a bay were all ignored. Continuing to battle the heavy seas and storms Van der Decken started to become increasingly angry. He finally raced out on deck and shouted at the heart of the raging storm and the Heavens 'May I be damned if I do for I shall be here until the day of judgement!" Shortly afterwards the ship sank with eleven souls going down with the ship. The Flying Dutchman was now doomed to sail the seven seas for all eternity.

The Flying Dutchman is said to suddenly appear out of nowhere. Some reports in the 18th and 19th centuries tell of vessels, particularly those from the Dutch East India Company, being approached by the Flying Dutchman whose crew actually attempt to converse with the astonished saillors and ask for messages to be sent home. When the living sailors tried to deliver the messages they often found that the intended recipients had been dead for many decades.

Amongst the more recent 'sightings' of the Flying Dutchman is the one made by the young Prince George of Wales, the future King George V, who claimed to have seen it in 1881. Prince George and his brother Albert served as midshipmen aboard the Royal Navy corvette HMS Bacchante on a three year voyage, and the sighting recorded by the Royal Navy was witnessed by the officer of the watch and the quater deck midshipman. Altogether, the sighting was witnessed by thirteen people at the time. The following entry in the princes' log was made regarding this pre-dawn sighting on 11 July 1881:

July 11th. At 4 a.m. the Flying Dutchman crossed our bows. A strange red light as of a phantom ship all aglow, in the midst of which light the masts, spars and sails of a brig 200 yards distant stood out in strong relief as she came up on the port bow, where also the officer of the watch from the bridge clearly saw her, as did the quarterdeck midshipman, who was sent forward at once to the forecastle; but on arriving there was no vestige nor any sign whatever of any material ship was to be seen either near or right away to the horizon, the night being clear and the sea calm. Thirteen persons altogether saw her ... At 10.45 a.m. the ordinary seaman who had this morning reported the Flying Dutchman fell from the foretopmast crosstrees on to the topgallant forecastle and was smashed to atoms.

Later sightings include the 1939 story that many people in Cape Town, South Africa, saw the Flying Dutchman heading straight towards the shore under full sail then suddenly disappear just before disaster. In 1942 reports by the world war two Nazi admiral Carl Doenitz claimed that some of Germany's uBoat crews had seen the Flying Dutchman east of Suez and at other locations.