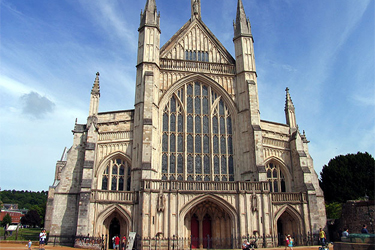 The Historical City of Winchester

The beautiful cathedral city of Winchester in Hampshire is one of the great historical cities of England and was the first capital city of England under the Romans and remained the most important until the Norman Conquest in the 11th century. It lies on the River Itchen at the western end of the South Downs National Park. Winchester has a long and varied history and some magnificent landmarks such as Winchester Cathedral and Winchester College, founded by William of Wykeham in the 14th century and the oldest public school in England still using its original buildings. Winchester's original City Cross still stands in the High Street. The Cross is known as the Buttercross and dates from the 15th century, and is decorated with twelve statues of the Virgin Mary and other saints and historical figures. The city walls were built during the Roman period but large parts of them were demolished in the 18th and 19th centuries as they fell into ruin and became dangerous. However, some parts of the walls remain and can clearly be seen.

Winchester, which in 1897 celebrated the 1000th anniversary of its civic institutions, is the successor of the British settlement of Caer Gwent, the Roman town of Venta Belgarum, and the Saxon Wintanceaster, which became the capital of Wessex in 519 and saw Egbert crowned as first king of all England in 827. Christianity was introduced in 634 by Bishop Birinus. Winchester was the capital of Alfred and of many of his successors, including Canute and the Danish kings; Edward the Confessor was crowned in the Old Minster in 1043; and William the Conqueror made the city a joint capital with London and was crowned in both, an example followed by many of his successors.

On the south side of College Street is the house in which Jane Austen died. On the same side farther on is the great gateway of Winchester College which became the model for the great public schools of England. The first stone of the chapel was laid in 1387, and the buildings were occupied in 1394. The school was allied with New College in Oxford founded by William of Wykeham in 1379.

Back to Hampshire Index