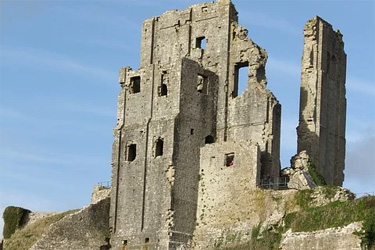 Ruins of Corfe Castle in Dorset

Corfe Castle was once regarded as one of the finest and strongest Royalist castles in England and was deemed by its builders to be impregnable, but was mostly destroyed by the Parliamentarians during the English Civil War. It was a favourite of the kings and queens of England in its early years and several of them contributed to the building costs. King John, who once imprisoned his wife in Corfe Castle and used it to hide his wealth including the Crown Jewels, paid for stronger walls, and the kings Henry III and Edward I added more towers and yet more walls.

Corfe Castle in Dorset dates back to the 11th century and was rebuilt in stone, from a 10th century wooden fortress, by William the Conqueror. The castle stands in a commanding position on a steep natural hill in the Purbeck Hills between the Dorset towns of Wareham and Swanage, and is now looked after by the National Trust. Corfe Castle was used for hundreds of years by the monarchs of England, and in 1572 it left the crown's control when Queen Elizabeth I sold it to her Lord Chancellor, Sir Christopher Hatton. It was sold on again in 1635 to Sir John Bankes and he was the owner during the civil war.

During the first years of the civil war Corfe Castle remained a Royalist stronghold and while Sir John Bankes was away in Oxford with and supporting King Charles I, his wife, Lady Mary Bankes, remained at the castle with their children. No matter what Cromwell’s army threw at Corfe the castle lived up to its impregnability and stood firm. The castle was later besieged twice by Parliamentarian forces, and Lady Bankes led the defence until treachery by one of the defenders, Colonel Pitman, allowed a force of Parlimentarians claiming to be Royalists inside the castle. It was finally taken in 1646 by a Colonel Bingham and his forces together with the intruders smuggled in by Pitman. Lady Bankes and her garrison were permitted to leave Corfe Castle later that same year. After the war, the Bankes family returned there but did not stay for long. Parliament then decided to try and destroy the castle with gunpowder so that it would never again withstand a siege and the subsequent ruins with ragged walls and shattered towers are what we see today - much of the structure remains and is still clearly identifiable.

There have been many reports of paranormal activity and ghostly sightings over the years at Corfe Castle. One of the best known stories is that of a white lady with her head bowed, whose apparition terrifies all those who catch sight of her. The ghost is believed to be that of Lady Bankes who walks along the castle walls then glides down the hill to the stream at the bottom. Some reports have claimed that she appears headless but there is no earthly reason for that as she was spared by Cromwell's army. The National Trust tearoom also plays host to the occasional ghost of a Roundhead.

Back to Dorset Index