City of Exeter in Devon
UK IMAGES and REFERENCE 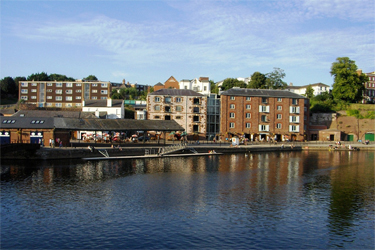 The Quay at Exeter in Devon

The City of Exeter

Historic Exeter is an ancient city and the county town of Devonshire in south-west England. It is situated on rising ground on the left bank of the River Exe with a beautiful cathedral, founded in the 11th century and dedicated to Saint Peter, and substantial remains of the original Roman city walls. Exeter Castle, a Norman building, overlooks the city.

Exeter has a long history and in 1068 the town submitted to William the Conqueror after a long and siege. After accepting the city's honourable surrender William swore an oath not to harm the city or increase its ancient tribute. Immediately after the siege ended William started work on building Rougemont Castle to maintain Norman control over the area. During the high medieval period, both the cathedral clergy and the citizens enjoyed access to sophisticated aqueduct systems which brought pure drinking water into the city from springs in the neighbouring parish of St Sidwell's. For part of their length, these aqueducts were conveyed through a remarkable network of tunnels, or underground passages, which survive largely intact and which may still be visited today. Over the years, Exeter has frequently been besieged. Though occupied by Parliament at the onset of the Civil War, it was later taken and held for the king until 1646. William III was proclaimed in Exeter in 1688. The University of Exeter was founded in 1865 and incorporated as the University College of South-West England in 1922.

During the second world war Exeter suffered greatly from bombing by the German Luftwaffe and in 1942 over 40 acres, including many ancient buildings, were destroyed. Between April 1941 and April 1943 Exeter was bravely defended from enemy bombers by the Polish 307 Squadron, night-fighters nicknamed the 'Lwów Eagle Owls' who were based at Exeter Airport. The city of Lwów shared the same motto as the city of Exeter - 'Semper Fidelis' (Always faithful).

Back to Devon Index