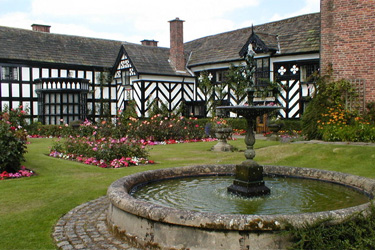 An enchanting village, set amongst forest, parkland and ornamental ponds. The site of the beautiful 16th-century timber-framed Gawsworth Hall was the seat of the Fitton family from 1306 until it was taken over by the Mainwarings in the late 17th-century. The house is notable for its black-and-white gable and great windows overlooking spacious lawns and gardens embellished with five lakes. In the grounds are the traces of one of the finest tilting arenas in England, nearly 200 metres long and about 60 metres wide. That it should have been here was fully in character with the reputation for aggressiveness which caused the Fitton family to be known as 'The Fighting Fittons' among the chroniclers.

The Old Rectory, with its black-and-white medieval walls dating from 1470, encompasses a gracious central hall with an open roof and carved timbers, the whole fronted by a window made up of scores of diamond panes. The church is mainly a 15th-century perpendicular structure, on Norman foundations, and stands near two of the Gawsworth lakes in company with yews which may well have supplied the Cheshire archers with bows in the I2th-century. Gargoyles and other carvings enrich the tower, matching their oddity with heraldic shields and canopied niches ornamenting the buttresses. A Tudor doorway leads from the neat stone porch to the nave, with its 400-year-old font bowl and delightful painted roof. In the chancel are tombs of the Fitton family, one of whom, Sir Edward Fitton, married Anne Warburton when he was only 12 years of age and she a month younger. They lived together for 34 years in uninterrupted harmony and had 15 children. A son, also Sir Edward, born in 1550, became Lord President of Munster and died in London in 1606. His monument is at Gawsworth Church without his effigy, but his wife and children are represented in stone at the side of the space it should have occupied. One of the daughters in the group attained the distinction of being accepted as a favourite Maid of Honour by Elizabeth I, but was soon in disgrace following an affair with the Earl of Pembroke. It is of particular interest that she is now thought to have been the Dark Lady of Shakespeare's sonnets.

Near the church is a wood in which may be seen the tomb of 'Maggotty Johnson', sometimes called 'Lord Flame' after the leading character in one of his operas. He was by profession a fiddle-player and stilt-walker, who had begun life as a dancing-master, and is remembered more for his eccentricity as a person than as a playwright. The opera was called Hurlothrumbo and ran for a month, encouraging Johnson to write three more plays in expectation of a London production, but this time he failed to arouse any interest and returned, chastened, to the village. He died in 1773, aged 82, and was buried in the place of his own choosing.

The New Hall, much larger than the old one, was built early in the 18th-century by Lord Mohun, whose duel with the Duke of Hamilton in Kensington Gardens resulted in both their deaths. The duel, which arose from differences connected with the disposal of the estate, became the subject of a chapter in Thackeray's Henry Esmond. The New Hall is now a home for the aged, but Gawsworth Old Hall is open to visitors and also has a charming carriage Museum.