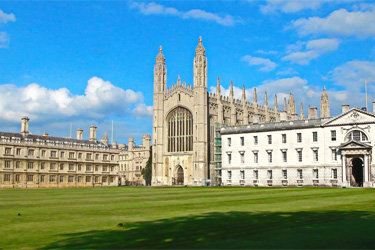 The City of Cambridge

Cambridge is one of the most important and beautiful towns not only in East Anglia, but also in Britain. The quality of its buildings, in particular those belonging to the University, and the special atmosphere created by the felicitous combination of river and gardens have given the city a place on the itinerary of every visitor to this country. The University has influenced not only the architecture of the town but also its character: its bookshops are among the finest in the country, and the adventurous programmes of the two theatres and the cinemas, the frequency of excellent concerts and the wide range of restaurants reflect the tastes and interests of the academic population.

In an age of new boundaries the old concise limits of East Anglia - Suffolk, Norfolk and the Isle of Ely - have been stretched alarmingly in order to accommodate weather forecasts, regional development schemes and TV programme planning. While not allowing, as these authorities sometimes do, that the area reaches upwards to Hull and across to Birmingham, it is possible to see that Essex - the East Saxons - and Cambridgeshire do share an affinity with the chief characteristics of the region, though for the East Anglian proper his country begins in the Stour Valley, rides steadily out to the chilly North Sea in a fine parabola of heath, shingle and marsh, until it reaches the Wash, and concludes in the geometrical sluices and peat of the Fens. This was the kingdom ruled by the Wuffingas, whose burial-ground at Sutton Hoo has thrown a very civilized light upon the Dark Ages. And before both the Roman and Anglo-Saxon conquests it was the highly populated kingdom of the Iceni and the Trinovantes.