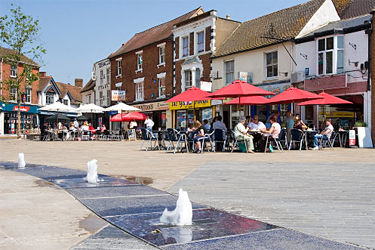 The ancient town of Aylesbury is built on a rolling hill in the heart of Buckinghamshire surrounded by beautiful, unspoiled scenery and overlooks a wide vale which stretches from the borders of Bedfordshire to those of Oxfordshire. Aylesbury is a historic town with quaint narrow streets and a cobbled market square which was once the cattle market. It is known for its collection of monuments such as a Victorian clock tower and the huge monuments to John Hampden, Lord Chesham, and Disraeli. It was John Hampden who made a stand against King Charles I in 1635 when he refused to pay a tax called Ship Money as he believed that it was for the king's own pocket rather than the Navy.

In Aylesbury's market square stands the National Trust property the Kings Head. This old coaching inn has fascinating architectural features, dates from the 15th-century and was once a monastery guest house. Inside the lounge area there is a magnificent leaded window with the arms of Henry VI and his queen. Cromwell's chair rests in the corner as he is believed to have stayed at the inn on his way back to Worcester. Visitors to the Kings Head should see the ancient cobbled courtyard and the old stables. During the English Civil War Aylesbury was generally a stronghold and a base for the King and his Parliament forces but it depended on how the battles were going.

Aylesbury was made the new county town of Buckinghamshire by King Henry VIII in 1529 as an attempt to impress Anne Boleyn and her family during their courtship and his visits to Hever Castle in Kent. He did this as Anne Boleyn's father owned Aylesbury Manor and was occasionally in residence. The County Museum is within a Georgian building and is an excellent resource for the history of the county from prehistoric times. Hartwell House, near Aylesbury, is a grade II listed Jacobean mansion and was where the French King Louis XVIII lived for several years during his exile between 1810 and 1814, and the museum houses many items that were used by him during this period including a bed and a confessional chair. Hartwell House is also where the French king's wife, Marie Josephine died in 1810 and is buried in the churchyard there. Prebendal house is an 18th-century building that once the home of John Wilkes, the radical Member of Parliament for Aylesbury until he was expelled for insolence in 1769.

St Mary the Virgin is the Parish Church of Aylesbury and is situated in the middle of the old town. The church dates from 1271 AD, is the oldest surviving building in Aylesbury and is highly visible as it stands on a small hill. It is one of the tallest buildings in the town. St Mary the Virgin is also the County Church for Buckinghamshire and is open seven days a week to visitors. In the Refectory, refreshments and hot drinks are usually available except Sundays.