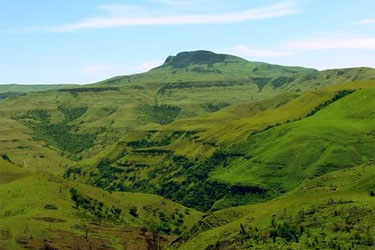 The settlement of South Africa in the 19th century has a very turbulent history and it was especially true in Zululand, a province in northern Natal where the Zulus lived and farmed. It was not helped by a dispute between the Zulu king Cetywayo and the British about the position of the boundary between Zululand and the Transvaal, which the British took possession of in 1877. This boundary dispute quickly led to the Zulu War of 1879 which was the greatest of the wars fought by Europeans against African natives.

The Zulus, who lived in Kraals (villages with dome-shaped huts), became a highly organised and disciplined people when their most outstanding king, Chaka (Shaka), who was both clever and cruel at times, took control in 18th century when the Zulus were a fairly small group of cattle herders living in the north of Natal. He made the warriors fight with a short spear called the assegai and defend themselves with a shield made from animal hides. He also formed great impis (Zulu regiments) which killed anyone in their way with merciless efficiency. Chaka's method during battles with other tribes was to tell them he would kill them altogether or take them under his rule. When he did conquer other tribes he would leave only the young boys and unmarried girls to remain alive. After Chaka was murdered in 1828 by his two half-brothers he was succeeded by his half-brother Dingaan who was an agressive warrior and who repeatedly waged wars against the white men who were attempting to settle in the land. Dingaan was eventually overthrown by the Boers (Dutch settlers) and his more peaceful brother Panda became the new Zulu king. When Panda died in 1872 he was succeeded by his son Cetywayo who was much more like Chaka and Dingaan than his father.

The new Zulu king Cetywayo was clever and also strict, and his intention was to restore the Zulu nation to its former greatness. He kept a large army of young warriors who were forbidden to marry until each had killed an enemy. This was known as 'the washing of the spears'. With the British taking possession of the Transvaal province in 1877 this meant that the Zulus were now almost surrounded on all sides by the British Transvaal and Natal provinces. Irritated by this, the Zulus began sending small raiding groups into Natal causing the British settlers to live in constant fear of attack.

The British governor of the Cape and high commissioner for South Africa at the time, Sir Bartle Frere, felt that now the Zulus needed to be controlled so he issued an ultimatum to Cetywayo on December 11, 1878 which he knew would not be kept. He ordered Cetywayo to disband his army of warriors and to allow them to marry whenever they wanted to, to pay for the incursions into Natal and to allow British authority in Zululand. Cetywayo made no reply to these demands so the British prepared for an invasion of Zululand in January 1879.

It took the British several months to prepare a much larger force and advance on Ulundi, the Zulu settlement where Cetywayo lived. This was the turning point of the Zulu war as the Zulus were defeated by the British. The Zulu king Cetywayo eventually surrendered and was imprisoned in Cape Town.

Zululand was divided among thirteen Zulu chiefs who were forbidden to bring back the old military system or to import firearms. However, peace did not last very long and the chiefs soon began to fight among themselves. In 1883 the British allowed Cetywayo to return to Zululand but the next year he was driven out by a rebellion and died. Lord Chelmsford, who was a great favourite of Queen Victoria, had a seizure and died whilst playing billiards at the United Service Club in London on 9 April 1905. He is buried in Brompron Cemetery, London. Sir Bartle Frere died at Wimbledon, London on 29 May 1884. He was buried in St Paul's Cathedral. Zululand became a British possession in 1883.

Wikipedia - Anglo-Zulu War
History of The Zulu Wars in South Africa.
Back to Articles Index