The Legend of Pandora's Box
UK IMAGES and REFERENCE 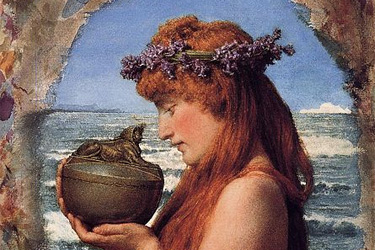 An Artist's Impression of Pandora

When The Box Was Opened!

A lot of people have heard of the Greek legend of Pandora's Box but few are actually aware of this particular story which has been told and re-told since the earliest times, with many versions referring to a greek jar (a pithos), not a box. This short article explains what the legend was all about. Pandora's Box is one of the ancient Greek stories about the beginnings of the world.

Apparently, in the very beginning of the world and shortly after it had been created, it was only inhabited by men. There were no women according to the story. The Greek gods Zeus and Prometheus fell out with each other and had a quarrel. Zeus did not want men to have fire on earth so he hid it away, but Prometheus found it and brought it back again. This, of course, badly upset Zeus and he became so angry that he decided to send something down to men which would cause trouble. So he made the first woman. She was called Pandora, which means the 'all-gifted', because the Greek gods and goddesses gave her gifts to bring with her, including beauty, charm and flattery. Zeus's present was a special box which Pandora was forbidden to open.

Later, Pandora became the wife of Prometheus' brother Epimetheus and at first all went well, until she grew very curious about what was inside the box. Soon, curiosity got the better of her and she couldn't help herself - she opened the box! At once, a swarm of little winged monsters flew out. They were disease, envy, anger, revenge and all the other curses that brought the happiest times of the world to an abrupt end and made man miserable and very unhappy. Pandora started crying because of what she had done and quickly tried to close the box, but it was too late - the flying winged monsters had escaped into the world. Only Hope was left inside the box!

With grateful thanks to The UK-Warehouse

Back to Articles Index