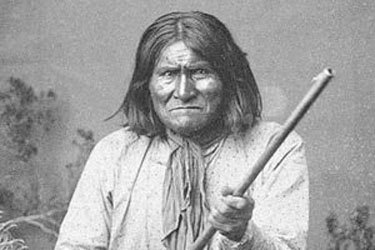 Geronimo was a leader of the Bedonkohe band of the Chiricahua Apache tribe with a small group of followers, and was born in 1829 in No-Doyohn Canyon, in what was then Mexico. He was a fierce and ruthless fighter in his early years but in his final days became a celebrity with some even regarding him as a hero. He led the Apache defence of their homeland against the United States and Mexican armies, and resisted the American advance in the Southwest territories of New Mexico and Arizona. Geronimo and his people followed the Apache tradition of raiding neighbouring tribes, settlements and homesteads to replenish supplies, guns and ammunition as well as horses and other livestock. This was the usual Apache way of life and was an integral part of the Apache Wars. Mexico responded by placing a bounty on Apache scalps which only increased the frequency and ferocity of the raids.

Geronimo was to develop an intense hatred of Mexico and its people. In 1851, whilst Geronimo and his followers were away on a trading expedition, Mexican soldiers attacked his camp because of the continued Apache raiding. When the Apache warriors found out they returned to the camp quietly at night. When they arrived Geronimo found his mother, wife and three children had all been murdered along with the remaining warriors, and all their supplies taken or destroyed and their ponies taken. The loss of Geronimo's family was to fuel his hatred of Mexicans for the rest of his life.

The fighting and raiding by all sides continued. Geronimo and his Apaches stepped up their attacks on wagon trains, stagecoaches, and miners who were streaming into the Southwest looking for gold. In 1873 the Mexicans again attacked the Apache but this time, after months of fighting in the mountains, both sides decided on a peace treaty at Casas Grandes, Chihuahua, Mexico. However, the peace did not happen. During peace negotiations the Mexican soldiers gave the Apaches mescal so they would become intoxicated. When this happened the Mexicans attacked and killed about 20 Apaches and captured some others. The Apaches immediately retreated back into the mountains once again.

The Chiricahua leader was Geronimo's father-in-law, Cochise and he now decided that the Apaches would never win a continued and prolonged war against the military might of the United States. Cochise then agreed to the establishment of a reservation for his people, but a number of Apache including Nana, Mangus (son of Mangus Coloradas), Chihuahua, Naiche, Geronimo, and their followers fled the San Carlos Reservation in Arizona after a show of force against the reservation's commanding officer Britton Davis. Geronimo spent years fighting to stay out of reservations.

Finally, after years of struggling, fighting and raiding, Geronimo and his Apache followers grew weary, tired and hungry. He realised that he was never going to win and remain free in their homeland so he and his band surrendered to U.S. General Nelson A. Miles in 1886. General Miles later said that Geronimo was one of the brightest, most resolute, determined-looking men that he had ever seen.

Geronimo and the Chiricahua were eventually sent to Fort Sill in Oklahoma as prisoners of war. After being thrown off his horse in February 1909 whild riding home and lying on the ground all night in bitterly cold weather, Geronimo died of Pneumonia six days later. His nephew was with him and just before he died he said "I should have never surrendered. I should have fought until I was the last man alive." He was buried in the Apache prisioners of war section of the cemetery at Fort Sill.

Back to Articles Index